Banks had offered 2,000 such properties to the Housing Agency under a new scheme 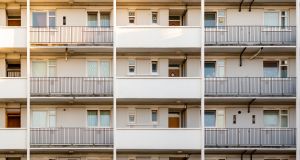 More than 2,000 repossessed homes have been offered by banks to the Housing Agency for social housing under a new scheme. File photograph: iStock

More than 2,000 repossessed homes have been offered by banks to the Housing Agency for social housing under a new scheme, but just 163 have been made available to tenants, new figures show.

Data provided to The Irish Times by the Housing Agency reveal that, since the end of 2016, it has been offered 2,096 properties to buy with a new €70 million “revolving fund”.

Of these dwellings, just 45 are now owned and let by approved housing bodies (AHBs), with a further 118 under “caretaker” arrangements with AHBs to enable tenants use them before the AHBs yet own them.

Under a key action in Rebuilding Ireland – the Government’s July 2016 plan on housing – a €70 million fund was created for the Housing Agency to “engage with banks and investment companies . . . to acquire properties for social housing nationally”.

These homes must be sold on to AHBs – such as Clúid or the Peter McVerry Trust – before they can be let to social housing applicants.

The Government has set a target of 1,600 repossessed homes to be bought by the agency and sold onto the AHBs by 2020.

The latest agency data, however, have been described as “alarming” and “inadequate” by housing policy experts, with suggestions some AHBs should be cut out of the process and the homes sold directly to local authorities.

Since autumn 2016, the Housing Agency made bids on just 887 of more than 2,000 repossessed properties offered by the banks. An agency spokesman said more than 1,000 homes were deemed “unsuitable” for social housing, due to location, size or structural issues.

Some 555 bids were accepted and purchases have been completed on 461. Under the scheme the homes are sold on to AHBs, replenishing the €70 million fund to allow the agency buy more homes.

However, of the 461 homes bought so far, just 45 have been sold on by the agency to AHBs.

“Total sales to AHBs at the end of 2017 were 36 dwellings. In addition, contracts have been signed for the sale of a further 57. Of these, nine closed in January, bringing the total to 45 sales,” according to the agency.

Although just 45 have been sold on to AHBs, some 163 homes have been tenanted. Asked about the discrepancy, an agency spokesman said a “caretaker lease” arrangement was in place, allowing AHBs tenant 118 homes despite not yet owning them.

The scheme itself is “brilliant” and “should be delivering hundreds, if not thousands, of social houses”, says David Hall of the Irish Mortgage Holders Organisation and founder of new AHB Icare Housing.

“The value the banks are offering is good. But the pace at which it’s happening is just bonkers. A lot of people are good at talking about a housing emergency but not very good at behaving like there is one.

“Some of the AHBs seem to be napping on this and it might be time to think about cutting some of them out. We need houses.”

“You have to wonder why it’s taking AHBs so long to buy homes and how long these ready-to-go homes, owned by the State, are lying empty in the middle of a housing crisis.”

Donal McManus, chief executive of the Irish Council for Social Housing, said there were complications outside AHBs’ control, slowing the process.

“The Housing Agency is buying these homes and they’re not all suitable for AHBs. Then some of them require a lot of work. Raising the finance to buy them means not only doing the works, but we have to get sign-off on the works for the financial institutions.”