‘It was really scary... The whole ambulance was swaying’ 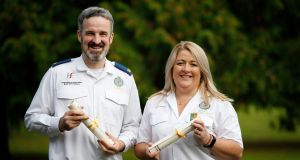 Olive Murphy felt unusually nervous the morning of Monday, October 16th, 2017 as she set off for her shift as an advanced paramedic on the roads of west Cork.

She had heard the severe weather warnings ahead of Storm Ophelia and already witnessed the power cut in Clonakilty.

“It was really scary and I don’t scare easily,” recalled Ms Murphy after receiving a certificate of bravery for the courage she and her colleague James Hennessy showed that day. “I’m nearly 20 years working with the ambulance service but I was actually really worried about the weather that day and worried about leaving my family.”

About halfway through the shift, the pair received a call that a woman in her nineties living near the village of Ballineen had lost the use of her electrically powered mains oxygen machine due to a power cut.

“We had to divert several times and tried several roads,” said Ms Murphy, who remembers stopping on a number of occasions to pull debris from the road. The team relied on an old tool kit in the ambulance to chop through trees blocking their path. “We’d get around a corner and realise we weren’t going to get through so had to turn and back track. But we eventually got to the farm.”

After transferring the woman to the ambulance, the pair made their way to Bantry General Hospital along roads littered with fallen trees. “We would have done more life-threatening calls before with people on the brink of death but this day it was the weather that was the danger. The whole ambulance was swaying. We were about 16 hours out, there were no other crazies at work that day.”

Mr Murphy and Mr Hennessy were two of the 20 people honoured at Farmleigh House in the Phoenix Park on Friday at the National Bravery Awards.

Chairing the awards, Ceann Comhairle Seán Ó Fearghaíl paid tribute to the men and women who had shown “exceptional bravery” and “strength of courage” in the face of adversity to help their fellow citizens. He also commended the many gardaí honoured at Friday’s event.

“The fundamental difference to peoples’ lives that you made is immeasurable,” Mr Ó Fearghaíl told recipients and their families. “It’s important that these courageous acts of bravery are acknowledged.

“We thank you for showing us that we can all be better men and women.”

‘A lot to deal with’

Garda Darren Blackwell, one of four gardaí who intervened to save a man’s life after he attempted to jump from the M50 bridge over the Strawberry Beds last year, said it was important to remember the people whose lives were saved. “It’s easy to forget that person. As long as you keep him in mind, that’s what it all comes down to at the end of the day, his well being.”

Sgt Gavin Coleman, who received a silver medal and certificate of bravery along with Garda Blackwell, Garda MJ Carroll and Garda Jason Walsh, said it was important that any person caught up in such an incident take the time to reflect on what happened after the fact.

“Just to realise the gravity of what happened, it’s a lot to deal with and not something that happens every day. Thankfully, in our case everybody ended up ok.”

Friday’s event was also attended by David Logan from Bangor in Co Down who was part of a group of children saved by James Gallagher, Mickey (Red Michael) Gallagher and the late Michael Gallagher off Roan Inish Island near Portnoo in western Donegal in 1956.

The three former fishermen were honoured at Farmleigh for their bravery in saving 13 people after the punt they were travelling on sank. Mr Logan only discovered it was the Gallagher brothers who had helped save his life in May of this year, nearly 63 years after the sinking.

“I always felt I should thank somebody for having rescued me. The bizarre thing was we didn’t know about the fishing boat because it came up behind us. We were in the water and the next minute we were in the boat.”

Mr Logan is still searching for the men who actually pulled him from the water. “I believe it was either John Horn or Kevin Nerr. I’d love to meet the guy who saved me.”