'It's a disgrace': Anger in Thurles as Traveller homes dispute goes to court

October 18th, 2018: Businessman Peter Casey visits the Thurles estate which has been a cause for dispute between the county council and local Travellers. Video: Kathleen Harris 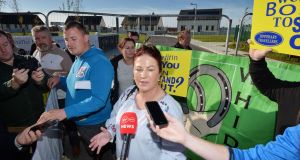 A security guard, a fence and discarded protest signs on the ground outside six new houses are all that remains of the political storm that blew through this part of Tipperary last year.

“We want a President that represents ALL the people of Ireland, ” reads another.

These houses, about three kilometres outside Thurles, were the subject of headlines when businessman Peter Casey visited the Cabragh Bridge site during his contentious run for the presidency last October and made critical remarks that the completed homes were lying vacant during a national housing crisis.

The houses were built for members of an extended Traveller family, descendants of the late William McCarthy who have lived on this land beside an old railway bridge for four decades.

The cost of the houses stands at almost €2.3 million – about €383,000 per house – including €1.7 million plus VAT in construction costs, according to figures released by the council under the Freedom of Information Act.

The fact that the houses – two five-bedroom houses and four three-bedroom houses – remain vacant almost a year since their completion is the cause of much frustration for locals and all the parties involved in trying to resolve the situation, not least the Travellers themselves.

“The council won’t give us the keys. We want the keys but they won’t give them to us. That’s it, full stop,” one member of the McCarthy family told The Irish Times, declining to give his name.

At the centre of the disagreement leading to the delay in the six Traveller families moving into the homes is whether or not Tipperary County Council should provide stables and land for their horses, which, to these families, is an intrinsic part of their culture.

The families insist they never asked for stables or any additional land with each house as a condition of occupying the houses.

The council says the families initially indicated that they thought that stables and about a half-acre of grazing lands would be provided with each of the new houses – something the council refuses to provide.

Negotiations between the council and the families have been ongoing since September 2018 and were complicated by Casey’s controversial remarks that shone a national spotlight on the issue.

A proposed compromise agreement, announced by the council last month, aims to resolve the long-running dispute by permitting the families to keep their horses at the existing site across the narrow country road from the houses.

The agreement is conditional on another four families who moved on to the encampment in recent years vacating the site, the removal of all existing living accommodation on the council-owned slip road off the Thurles-Holycross road and the securing of the site “against any future illegal encampments”.

The first part of the agreement is where matters are stuck.

The council issued legal action late last month against the other four families – naming eight people in court proceedings – in an attempt to remove them from the site. The move could delay matters further.

They have been given notice to leave, and the council believes it has a strong case, though the matter rests with the courts. The enforcement case is scheduled to come before a High Court judge on Thursday.

Court records show that no solicitor has come on record to represent the four families in the proceedings.

Ed O’Mara of the Tipperary Rural Traveller Project, which helps Travellers in the county, declined to comment on the agreement and said the six families who were due to occupy the homes had their own legal representation in the negotiations.

Tipperary solicitor Colin Morrissey, who represents the six families, says they are anxious to move into the houses but there were “a couple of boxes that need to be ticked for the agreement to become operational”.

He does not know whether the other four families have legal representation.

Despite the proposed agreement, the case shows how far this dispute still has to go to find a solution.

“Just because we have come to an agreement doesn’t mean it has been resolved yet. We are only on the first step of the ladder,” said the council’s director of housing, Sinéad Carr.

Carr acknowledges that the proposed solution is not ideal but is “the best and most effective outcome” given that the council is “extremely constrained” legally in what it can do.

She lists off the issues that have complicated matters for the council: it does not own all the lands at the Cabragh Bridge site (there are three other landowners); the long-resident McCarthy families have built up sufficient legal rights over the years to remain in their encampment; and the council is statute-barred from taking legal action because some of the structures are in place more than seven years.

“It is not the optimal solution that everyone wants but it is most pragmatic solution,” she says.

The compromise has generated mixed feelings locally, and some anger, given that the houses were built with the intention of clearing the land opposite the houses but now stables owned by the families will remain.

“I am obviously disappointed that not all structures are being removed – that should have happened,” says Thurles-based Independent councillor Jim Ryan.

“I will be looking for assurances from that council that no other caravans can move in there.”

“This has cost the taxpayer nearly €2.3 million for top-of-the-range houses. It is totally embarrassing and unacceptable, and a lot of people in Thurles are really angry about this because there are 400-plus people in Thurles on the housing list,” says Ryan.

Carr says signing contracts in advance “would not be a common practice or indeed a practical one” given that families and circumstances can change and different decisions be taken over time. “It would have been difficult to enforce, even if it had been undertaken,” she says.

An arm and a leg

The ongoing cost of negotiating the agreement and managing the housing site has riled others.

“It has cost an arm and a leg. The council is having to pay a private security company to police the site, and then there is the cost of mediation,” says Mattie McGrath, Independent TD for Tipperary.

“I am not happy with the way the figure has come out. It was €1.7 million initially for the construction cost, and then it came out at almost €2.3 million. I have no faith in the figure.”

The council should have been stronger and if they were, we wouldn’t be where we are today

David Doran, a former Sinn Féin-turned-Independent councillor who lost his seat in May’s local elections, says local “ire” is not with the Traveller families who are getting the houses but with “very extravagant” houses and the council’s special treatment when hundreds of locals are waiting for housing.

“To leave six houses empty and so many people waiting for houses – and to be negotiating some sweetheart deal and leaving stables at the far side of the road, creating a serious health-and-safety risk with traffic over and back … This was very badly handled by the council,” says Doran.

Public representatives were led to believe that the houses would be occupied by the families once completed and that the encampment would be dismantled and the site kept free of further camps, he adds.

“The council should have been stronger and if they were, we wouldn’t be where we are today.”

It bothers him that people are accusing critics of the council’s actions of discrimination against Travellers when he sees it as raising legitimate concerns about council spending and management of the issue.

“That really annoyed me. I come from a background that would be tolerant of everyone. I would be saying that it was wrong irrespective of whoever the tenants were,” he says.

Most locals who speak to The Irish Times at Dwyer’s Centra shop, two kilometres from the Cabragh Bridge houses, direct their anger at what they see as the council’s mismanagement of the whole episode, not the Travellers.

“They are making exceptions where they shouldn’t – the fact that they are being allowed to keep the land that was supposed to be redeveloped or cleared,” says one local, David, who does not want to give his surname.

“They are back-pedalling on the arrangements. It is utterly disgraceful.”

A local woman who also does not want to be identified says: “How did it go wrong now and the houses have been built? It was obviously some big breakdown that wasn’t thought through.

“It is a disgrace it has gone this far.”

HOUSING IN TIPPERARY: BY THE NUMBERS