Orangemen parade at Rossnowlagh ahead of July 12th

The annual 12th July parade has taken place in Rossnowlagh, Co.Donegal where Orangemen from lodges in the Republic were joined by visiting members of Northern Ireland lodges. Video: Bryan O’Brien 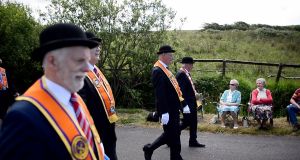 Orangemen took part in their annual march at Rossnowlagh Co Donegal on Saturday as is traditional, ahead of the main Orange parades in Northern Ireland on July 12th.

In glorious sunshine as many as 50 Orange Lodges from Donegal, Cavan, Leitrim and Monaghan, as well as visiting Orangemen from Northern Ireland and elsewhere, took part.

It began at 12.30pm, close to St John’s parish church, and continued through country roads for about 1.5 kilometres to the shoreline, described by the Grand Orange Lodge of Ireland as “ surely one of the most beautiful locations for an Orange parade anywhere in the world”.

A religious service,against the backdrop of the Donegal hills and the Atlantic, was held at 3pm.

It was chaired by the Co Donegal Oange Grand Master David Mahon and led by local Church of Ireland minister Canon Brian Russell with guest speaker Wallace Thompson, secretary of the Evangelical Protestant Society. The service included remembrance of those who lost their lives in the First World War.

Stanley Morton, from the Leitrim Grand Oange Lodge, said he had been coming to Rossnowlagh for “30/40 years”. He described the atmosphere on Saturday as, “electric, a fantastic day, a great family event.”

Maureen Moore from Magherafelt in Co Derry said “we really love coming here and the last two years we’ve got good weather. It means a lot” while Alan Thompson of Ballinamallard inFermanagh said it did not feel strange that there should be an Orange march in the Republic. “We don’t mind because we’re left alone. We can parade wherever we want,” he said.

The Grand Orange Lodge of Ireland was established in 1798 following attacks on Protestants in Co Armagh in 1795. It commemorates the Battle of the Boyne in July 1690 where William III, Prince of Orange, was victorious and went on to lay foundations for constitutional democracy in Britain.

According to the Grand Orange Lodge of Ireland “today defending Protestantism is not so literal as it was in 1795, but it requires us to take a stand for truth in an age of secularism and in order to defend our culture and tradition.”

Today there are Grand Orange Lodges in Scotland, England, the US, West Africa, Canada, Australia, New Zealand, as well as Northern Ireland and the Republic. There are members in nine counties of the Republic with 44 Orange halls in Donegal, Cavan, Monaghan and Leitrim.