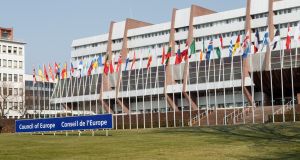 Council of Europe urged the State to make progress towards regime that is ‘more respectful of the human rights of women’. Photograph: Getty Images

The State has been urged by one of the world’s largest and most influential human rights bodies to make progress towards a legal abortion regime that is “more respectful of the human rights of women”.

A report published by the Council of Europe on Wednesday follows a visit by its human rights commissioner Nils Muižnieks to Ireland last November to investigate the treatment of women, children and Travellers.

“At the very minimum, abortion performed to preserve the physical and mental health of women, or in cases of fatal foetal abnormality, rape or incest should be made lawful,” he said.

The report, launched in Strasbourg on Wednesday morning, also welcomes some moves by the Irish Government to combat violence against women. But it says they are “still not sufficient and the judiciary’s response remains too weak, with few prosecutions and mild sanctions against perpetrators”.

Mr Muižnieks says the Irish authorities should ensure “sufficient human and financial resources to implement gender equality policies and continue and strengthen their efforts to guarantee much better participation of women in education, employment and political and business life”.

He noted the “persistence of gender stereotyping”in Irish society and the “continuing disadvantage affecting women in many fields of life.

“The commissioner stresses the need to combat harmful gender stereotypes that affect women and lead to discrimination against them, including through long-term measures addressing these stereotypes in education and the media and a review of the relevant constitutional provisions.”

He states that Article 41.2 of the Irish constitution “perpetuates gender stereotypes”.

The article recognises that “by her life within the home, woman gives to the State a support without which the common good cannot be achieved” and that the State should therefore “endeavour to ensure that mothers shall not be obliged by economic necessity to engage in labour to the neglect of their duties in the home”.

Mr Muižnieks noted Ireland had signed the Council of Europe Convention on Combating and Preventing Violence Against Women and Domestic Violence, known as the Istanbul Convention, in 2015.

He said the authorities here had shared with him their intention to ratify the convention in the first quarter of 2018 once domestic legislation had been brought into line with it.

In relation to Travellers and Roma people, the commissioner noted the Government had taken a number of measures in recent years in their favour. But he said they continued to suffer from discrimination across all fields of life, including in education, employment and accommodation, as well as from racism.

On children, the commissioner also noted a number of positive steps in recent years, such as the amendment on children’s rights in the constitution in 2015.

But he said the “unique situation” whereby the great majority of State-funded primary schools were privately run by religious patrons raised a number of issues in relation to the prohibition on discrimination on religious grounds and, more generally, the need to ensure an inclusive education of all pupils.

In its response, also published on Wednesday, the Government thanked Mr Muižnieks for his “constructive” report and said it was grateful for his kind words on the cooperation received during his visit.

It noted Taoiseach Enda Kenny’s recent formal recognition in the Dáil of the Traveller community in Ireland as an ethnic group.

The Government acknowledged an “excess of demand over service” for spaces in refuges for women who have survived domestic and sexual violence. It said it recognised that the current rate of homelessness impacted on the length of stay across all refuges funded by the child and family agency Tusla.

On the abortion issue, the Government outlined the provisions of current legislation, including the Protection of Life During Pregnancy Act 2013.

It said medical professionals were not precluded under the Act from giving a pregnant woman “all the information necessary to enable her to make an informed decision provided a termination of pregnancy is not advocated or promoted”.

His report said he could see during his visit that, despite the return of economic growth, the most vulnerable had not yet started to benefit from the recovery and were still experiencing the negative impact of budgetary cuts.

Established in 1949 in the wake of two World Wars, the Council of Europe has 47 member states and advocates freedom of expression and of the media, freedom of assembly, equality, and the protection of minorities.