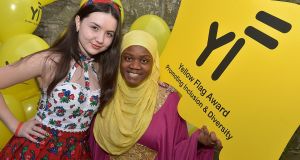 Five schools have been honoured for their efforts in promoting diversity and tackling racism.

The four primary schools and one secondary school were awarded yellow flag status for “addressing racism, fostering diversity and meeting equality standards within their schools and community environment”.

Speaking at the ceremony in Dublin city centre on Tuesday, which was attended by Minister for State Catherine Byrne, yellow flag programme co-ordinator Elva O’Callaghan praised the schools, particularly for their work in embracing Traveller children within the school community.

“While the programme has huge impacts on children from different ethnic minorities it equally benefits white settled children and their parents who learn about different cultures and break down their own stereotypes,” she said.

“Often children, especially Traveller children, who had been hiding their identity in school at the start of the programme are talking proudly about their culture at the end,” she added.

The initiative was established by the Irish Traveller Movement eight years ago with the aim of helping schools create cross-cultural understanding, promote racial harmony and provide equal recognition of diverse religious and ethnic traditions.