Irish birth and marriage certificates from 1864 to be available online 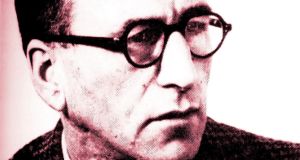 Poet Patrick Kavanagh, who died in 1967.

A further tranche of Ireland’s historical Registers of Births, Marriages and Deaths are being available to the public online from Tuesday.

Included are the November 30th, 1967 death certificate for poet Patrick Kavanagh and for his nemesis Brendan Behan, who died on March 20th, 1964.

Minister for Culture Josepha Madigan described this addition of further years of historic registers of births, marriages and deaths as “an exciting development in family history research for Irish people here and all Irish descendants around the world.”

She noted how “since this online service became available in 2016 over 2.1 million visitors to the website have viewed these records.”

Minister for Social Protection Regina Doherty described the Civil Registration Service as “one of the State’s essential services and one of the greatest resources for those establishing their family histories. Providing this open and free access to older records and register entries will further support the efforts of many family historians throughout the world”.

Research by the ancestry.iehas extablished how these historic registers show that many of our ancestors’ jobs have become extinct.

Included would be that including a snob, someone who repaired shoes; a knocker upper, whose job was to tap on the windows of workers to wake them for work ;and rat catchers who, as the name suggests, had a job catching rats in a specific area.

Also gone is the job of lamp-lighter, responsible for lighting and extinguishing street lamps around cities and towns; the linotype operator, who used hot metal to produce the daily newspaper; elevator opeator; fishwife - a woman who sold fish; town crier, who shouted news at street corners; and, a tweenie or junior domestic maid who helped older housemaids and cooks.