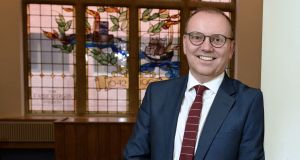 The Rev Dr William Henry: he will be one of the youngest ever moderators of the Presbyterian Church in Ireland. Photograph: Stephen Hamilton/Presseye

One of the youngest ever moderators of the church, he will hold office for a year. By tradition he is selected by the church’s 19 presbyteries throughout the island of Ireland on the first Tuesday in February of each year. Rev Dr Henry succeeds Rev Dr Charles McMullen.

The new Moderator’s installation marks the opening of the 2019 Presbyterian General Assembly at Church House in Belfast, which will be attended over the next four days by up to 1,000 ministers and elders from the church’s congregations across Ireland.

They will be presented with an update on a three-year project that explores how Presbyterians responded to the Troubles. They will also address a report on human rights which seeks to establish a frame work, based on biblical principles, that will assist the church in dealing with rights-based issues.

The Presbyterian Church in Ireland has just under 220,000 members belonging to 535 congregations across 19 presbyteries throughout Ireland, most in Northern Ireland.

Rev Trevor Gribben, clerk of the General Assembly and general secretary of the Presbyterian Church in Ireland, said “the discussions that we have, and the decisions that we take, will set the direction for the life and ministry of the church for the coming year and beyond. It is not only a collective and prayerful process, but a democratic one in the best sense of Presbyterianism.”

Last year the General Assembly decided same-sex couples can no longer be full members of the Presbyterian Church in Ireland, nor can their children be baptised.