Councils should be sanctioned if Traveller budgets not spent, report says 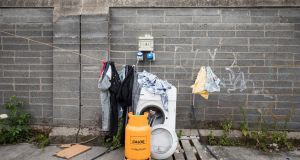 Sanctions should be imposed on local authorities which fail to spend Traveller accommodation budgets or the responsibility should be taken from them, a report from a Council of Europe body says.

In a hard-hitting report on Ireland the European Commission against Racism and Intolerance (ECRI) is also critical of ineffective hate-speech and hate-crime legislation and the response of gardaí to hate crime, and raises concerns about “ethnic profiling” by the Garda.

The commission is statutorily obliged to monitor member states’ treatment of minorities. Its country reports are compiled by independent experts on racism, racial discrimination, xenophobia, anti-Semitism and intolerance.

This fifth report on Ireland, covering a period up to December 6th, 2018, welcomes developments, including the passage of the same-sex marriage referendum in 2015, the formal recognition of Travellers as an ethnic minority in March 2017, and the passage of the Education Act 2018 prohibiting discrimination in school admissions on basis of baptism.

However, it says: “Efforts to meet the accommodation needs of Travellers should be increased, including by improving existing halting sites to meet decent and safe living standards and by providing adequate, accessible, suitable and culturally appropriate accommodation.”

It notes the under-spend by most local authorities of Traveller accommodation budgets and that: “as there is no provision for sanctions there is no accountability for under-delivery.

“ECRI’s delegation witnessed the consequences of this situation during a visit to a Traveller site (St Mary’s) in north Dublin. It was alarmed at the deplorable conditions...The site...had only one water connection point and one toilet facility for 14 families, including more than 40 children.”

It calls for greater investment in supports for Traveller children in schools “notably by restoring the visiting teacher service” and on authorities to increase awareness among Roma families about their children’s right to free pre-school education.

Only seven incidents of hate speech have been recorded by the Garda since 2013 under the Prohibition of Incitement to Hatred Act 1989 and just two were prosecuted. The report notes a significant level of hate speech “on the internet and social media in particular”– much of it against Travellers, Roma and Muslims.

“ECRI considers hate speech particularly worrying not only because it is often a first step in the violence but also because of the pernicious effects it has psychologically on those who are targeted and on social cohesion in general.

The direct provision system continues to be problematic and the report “strongly recommends that sufficient resources are invested in ensuring that asylum applications are processed more efficiently... to reduce time spent in direct provision”.

It calls for help for asylum seekers to access employment, alternative housing and that solutions are found to LGBT concerns in direct provision.