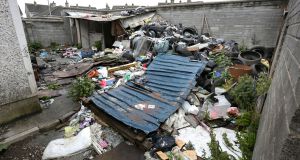 Rubbish at the back of one of the badly damaged and boarded-up houses in Fána Glass at Ballybane in Galway. Photograph: Joe O’Shaughnessy

Three Traveller families, who have been widely blamed for the destruction of houses and illegal dumping in their Galway city estate, have said they are “delighted” that recent drone footage “highlighted what [they] are living with”.

The Donovan and McDonagh-Delaney families say Independent councillor Noel Larkin, did a “good thing” in releasing drone footage in the weeks preceding recent local elections showing houses burnt out and piles of rubbish around their group-housing scheme in Ballybane.

The eight-unit scheme is down a slip road at the back of the Fána Glas housing estate. Ten children live here.

Though the three occupied houses are in good condition, the remaining five are destroyed. They are boarded up, their roofs either missing or almost totally stripped of slates. Some houses are filled with rubbish and another is burnt out.

Refuse, including white goods, mattresses, couches, tyres, broken glass and rubble, is piled behind houses, close to the entrance area and over a wall behind the estate.

A spokesman for Galway City Council said it was “impossible” to know with certainty how the homes had fallen into such disrepair or who was responsible for the damage and dumping.

Cllr Larkin, who was recently elected to a second term and has maintained a focus on anti-social behaviour, says he hired the drone to show the “wanton destruction” of council-owned property and the “atrocious lack of respect” to taxpayers by those who caused it.

“Families were given these houses with every convenience supplied, paying minimal rent and they still see fit to destroy these homes. Why would anyone destroy their home to this level?” he asks.

The images, showing also scorched earth where rubbish has been burnt, were widely covered in local media and gave rise to “a lot of anger from hard working-people who are just fed up with this level of anti-social behaviour”, says Cllr Larkin. He estimates the cost of the destruction at €2 million.

He said he had not spoken to the three families living in the Fána Glas scheme.

Margaret Delaney has lived in Fána Glas for 18 years and is married to Michael McDonagh. They have two young children. Her family, including her parents and an aunt and uncle, moved here from the roadside 18 years ago.

“We came from caravans. My dad, James, he wasn’t used to houses. He couldn’t stick it. So they, my parents, aunt and uncle, left those two houses and went to Carrowbrowne [halting site] about 12 years ago. Those houses were just left empty then. They were never handed out. It’s ridiculous the way it’s been let go and the amount of people who are homeless with no place to go.”

Other families moved out in the past decade, their houses left empty too, they say. The properties have been vandalised and stripped over the years by people from outside the estate, they claim. The dumping too, they say, is by outsiders – including Travellers.

Mr McDonagh points to boulders around the entrance to the scheme, which he says he asked the council for, to stop vans reversing in and out.

“The amount of people I’ve caught and stopped coming in over the years, but we can’t be here 24-7. I want to get more boulders. The council are doing their best as well in fairness.”

Asked his view on Cllr Larkin’s actions, he says: “I’m delighted he done it because it highlighted the problems we have here. It had to be highlighted. The only thing I didn’t like was they were kind of blaming us who live in here.”

The estate “is lovely and peaceful”, say the couple, who pay €53 a week in rent to the council. “But it’s a health hazard for our kids.”

They would like a transfer out of Fána Glas, ideally to somewhere in Galway county.

“Let the council either knock all the houses,” says Ms Delaney, “or keep them and build more. Build apartments for the young. But don’t put just Travellers here because if they do that people will think they have a right to come and do it all again.”

The Donovans too say they would like to leave, describing the drone footage as “a bit of an invasion of privacy but a good thing”.

A spokesman for Galway City Council said it is “aware of the estate management issues at Fána Glas. The council intends to bring forward proposals to redevelop the site and plans are being prepared. The scheme will include remodelling of that section of the estate and possible development of additional units in the immediate vicinity.”

There are currently 4,321 households on the council’s housing waiting list.