Limerick horse project seeks to provide a haven for youths 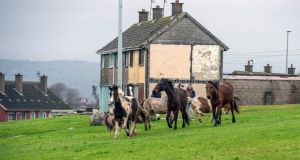 Stray horses are rounded up in Southill in Limerick. Photograph: Brenda Fitzsimons 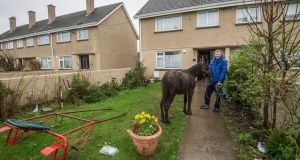 Limerick City and County Council has in the last two years spent €482,212 seizing 549 horses in the city and destroying 492 of them. Two more died in the pound, 24 were released back to their owners and 31 were rehomed.

The figures demonstrate the extent to which “horses” have become a significant social and animal-welfare issue in Limerick.

Against a background of five horses a week being seized by the council, a campaign has been launched to get public funding for an equine project to allow people living in disadvantaged areas to keep horses and to learn more about caring for them.

Ronnie Dearman (20) is one of 30 young people involved in the campaign.

Dearman has been around horses since he was “two or three”, has worked in stables, keeps two horses in Co Kerry and says he would love one day to own his own stables.

From Ballinacurra Weston in south Limerick city, however, he fears it may be an impossible dream.

“Every time I’ve been out with a horse I am stopped by the Garda. They pull you over, say: ‘Stop there. The pound is on the way.’ If people see you with a horse or hear you’ve had one pounded [seized] they think you’re just a bad influence, a bad person.

“The council, they just think we’re shit, excuse my language. But that’s what they think of anyone from this area who has horses. People like us aren’t meant to have horses, they think. They don’t understand, don’t want to.”

Ballinacurra Weston is classified as “very disadvantaged” by Pobal, the independent government agency. It has a male unemployment rate of 50 per cent and where 73 per cent of children are in lone-parent families.

Nearby O’Malley Park, in Southill, is also “very disadvantaged”, with a male unemployment rate of 69 per cent and 58 per cent of children living in lone-parent households.

It is illegal, in most circumstances, to keep a horse within the city boundaries without a licence. A horse found wandering or tied up may be pounded and destroyed. Getting a horse back can cost up to €1,500.

A council motion supporting an equine project, tabled by Anti-Austerity Alliance councillor Cian Prendiville, was passed in 2015 but little progress has been made.

After many years campaigning, the club won the support of South Dublin County Council, which provided the site, and the Department of Agriculture, which contributed €500,000.

Its young members have completed courses in horse care and pay €15 a week. A similar project for Limerick is a “no-brainer”, says Gallagher.

“When I first came here my view was the young people were cruel to the horses. There is a problem with stray horses, and horses not being looked after properly.

“But the more I talked to the kids, my eyes were opened. They were always asking questions about how to care for them.

“Their love for their horses gives them purpose. So many could drift down the route of criminality, joyriding, drugs – the horses divert them from that.”

Agreeing, Helps education officer Catherine Normoyle, who has delivered 12-week horse-care courses to some of the young people, says a club could be “so much more than just a horse project”.

“It is about building the lads’ self-esteem, teaching responsibility, empathy. Many of these kids have serious challenges in their lives.

“The horses are calming, so important for their mental health. After watching them with the horses no one can tell me these are bad kids. ”

A visit to Ballinacurra Weston and Southill finds numerous horses tethered to walls, in front gardens and roaming green spaces. Some are protected with blankets and look healthy. Others look miserable.

Boys and young men explain how much their animals mean to them. Several keep them on lands outside the city, while others describe having to move them from one green space to another in an effort to avoid the pounders. Almost all have had horses pounded and destroyed by the council.

Dearman tells how his horses were a comfort when his “mam passed away” recently. “When I’m upset, I talk to my horses,” he says.

A council spokesman said: “The council has received representations re the possibility of making lands available for the provision of a horse project in the south side of Limerick city and the council is in the process of considering this proposal.”