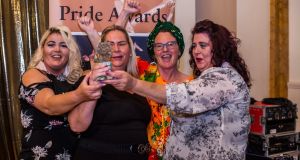 Carmel Winters, producer of the film Float Like a Butterfly, at the Traveller Pride Awards in the Pillar Room at the Rotunda Hospital where she presented the Charleville Women’s group from Cork with the award for arts and culture. Photograph: James Forde

A finalist from last month’s Ireland’s Got Talent competition was among eight winners at the annual Traveller Pride Awards in Dublin, presented on Thursday.

Sharyn Ward received the music award for her performance on the Virgin Media One show.

From Longford and a mother of two, her exceptional rendition of Black is the Colour earned her a place in Ireland’s Got Talent final where she sang One Starry Night – a song which “makes me proud to be a Traveller”, she says.

Since the show she has performed at events to raise awareness of Traveller mental health. She is finalising a record contract, her first concert is planned for July, and she will be soon taking part in a documentary about what it’s like to be a modern Traveller woman.

She also sings every week with the church choir in Dublin’s Darndale. On receiving the music award, she said it “means so much to me. I’m so proud to be a tinker.”

Chairwoman of the Justice for all Women & Children group Laura Angela Collins, from London, received the first award for “intersectionality”, due to her campaign for institutional redress.

Her mother was a survivor of an industrial school and St Vincent’s Magdalene laundry in Cork, where she was resident for 16 years, while her grandmother Angelina was confined there for 27 years and is buried in a mass grave with 72 other women.

On receiving the award, she said: “I personally feel this is for all the women in my family who walked before me, who were targeted – and told they couldn’t be proud of who they were – when we should all be allowed to be.”

Minnie Connors won the community award for organising the first Traveller-led group in Wexford. Last July she lost her younger sister Alice to suicide, the ninth suicide in the family.

Oein De Bhairduin from Galway, who works in the Oireachtas office of Independent Senator Colette Kelleher, won the enterprise and employment award while the sport award went to 16-year-old boxer Thomas McDonnell from Dublin.

Nikita Maughan (16) from Ballinrobe, Co Mayo won the youth award for her contribution to setting up a Traveller girls’ group in the town and Maynooth University graduate Kathleen Lawrence from Dublin won the education award, as she begins a Masters in Human Rights at UCD. In 2017 she became the first Traveller to secure a place on the Washington Ireland Programme.

Among those presenting the awards were Ceann Comhairle of the Dáil Seán Ó Fearghaíl, Minister for State at the Department of Justice and Equality David Stanton, singer Mary Black, and historian Catherine Corless.

Mr Ó Fearghaíl told the gathering than an Oireachtas committee report on Traveller issues due to be completed later this year would “not be allowed to stay on its shelf”.

He confirmed a committee had been tasked over the course of six month to examine Traveller health, education, employability and housing, and to come up with proposals for the Government to implement

“Politicians like me talk about building a society and leaving nobody behind. The truth of the matter is that for generations we have left the Traveller community behind,” the Kildare South TD said.

Director of the Irish Traveller Movement, Bernard Joyce, said the committee inquiry was a “significant step” for the community. He added he looked forward to the committee’s recommendations being implemented.