The highest, the lowest, the most and the least of the Eighth Amendment referendum

Early tallies indicate that the exit polls are accurate and a strong Yes vote will win the referendum. 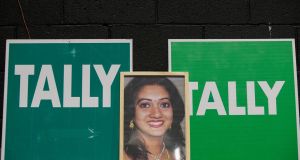 A tally sign featuring a photo of Savita Halappanavar during the abortion referendum count in the RDS, Dublin. Photograph: Gareth Chaney/Collins

The results in five charts

The result was announced at Dublin Castle on Saturday evening.

Galway East became the first constituency to report an official result, with 60.2 per cent of voters choosing Yes, to 39.8 per cent for No.

Dublin saw sizeable Yes votes across the city and county. Dublin Bay South saw a huge 78.49 per cent for repeal, the highest Yes vote in the country. Roscommon-Galway went for Yes by 57.21 per cent to 42.79 per cent. The constituency of Roscommon-South Leitrim was the only one in the State to vote against same-sex marriage in 2015. Note the constituencies have changed since then. (You can get a full breakdown of the marriage vote result here)

Donegal was the only constituency to vote No to repealing the Eighth Amendment, with a majority of 51.87 per cent.

You can get a full breakdown of the results here.

Taoiseach Leo Varadkar said  he hoped to have the proposed legislation passed within six months.

The results have also lead to calls for changes to Northern Ireland’s “Victorian-era abortion ban”, according to this report by Amanda Ferguson.

Read our full analysis of what will happen here.

The parents of Savita Halappanavar said they were “really, really happy” the Irish people were on course to deliver a strong Yes in the abortion referendum. You can read Kitty Holland’s interview with them here.

Earlier on Saturday, Mr Varadkar said: “I think what we’ve seen today really is the culmination of a quiet revolution that’s taken place in Ireland for the past 10 or 20 years. This has been a great exercise in democracy and the people have spoken.”

Speaking after the declaration of the result, the Taoiseach said: “We all want to ensure that there are fewer crisis pregnancies and fewer abortions.

“We will continue to improve access to sexual health and education to reduce crisis pregnancies and abortions further in the year ahead.”

Master of the National Maternity Hospital, Dr Rhona Mahony, who campaigned for Yes, said the referendum result “is all about the women who travelled in difficult circumstances and told their stories”.

Co-director of Together for Yes Orla O’Connor said the result was due to “a grassroots . . . campaign and I think what today will show is that this is a people’s referendum.

“Presuming that these exit polls are correct, the public haven’t just spoken, this is a resounding roar from Irish people about the horrors of the Eighth and how women should no longer be treated as second-class citizens in our society.”

Most Fianna Fáil TDs will respect the vote in the referendum and not try to frustrate legislation on abortion going through the Dáil, party leader Micheál Martin has said.

John McGuirk, spokesman for Save the 8th, told The Irish Times he had “made peace” with the result, acknowledging it was an overwhelming majority for Yes.

Iona Institute spokesman David Quinn acknowledged that many people who voted Yes were not pro-abortion, but were pro-choice. He told RTÉ’s Marian Finucane Show: “Even the expectations of the Yes side were surpassed.”

Cora Sherlock, spokeswoman for the LoveBoth campaign, said: “This is a very sad day for Ireland, that people have voted for abortion.”

You can read a more detailed account of reactions from across the country here.

The outcome of the referendum was clear even before a ballot box was opened on Saturday. According to an exit poll conducted for The Irish Times by Ipsos MRBI on Friday, the State was to vote by a landslide margin to change the Constitution so that abortion could be legalised.

The poll suggested that the margin of victory for the Yes side in the referendum would be 68 per cent to 32 per cent. It also found that 87 per cent of those aged 18-24 voted for repeal. You can read the full results here.

In his analysis of the results, director of Ipsos MRBI Kieran O’Leary said the exit poll indicated that support for repeal had a broad base, with a majority in most age groups voting in favour.

He said that those suggesting that the outcome of this referendum rested solely on the engagement of younger voters should be mindful that there were as many votes cast on Friday in favour of repeal by those aged 65 and older than by those aged 25 and under. You can read his full analysis here.

Irish Times political correspondents also discussed the exit poll and its implications in a special episode of Inside Politics, which you can listen to here.

Columnist Miriam Lord responded to the vote by saying “it leaves no doubt. The Irish people have taken ownership of their abortion issue. They have taken it out of the hands of unrepresentative lobby groups and celibate clerics and decided how they want to approach it.”

She added that the projected result was not a surprise, as “you could feel it in the air in the last week of the referendum campaign. Something had changed and something big was about to happen. It was there in the faces of the younger people – out there agitating, unashamed to be seeking basic rights for Irish women, because they were in the right.” You can read her full piece here.

Irish Times contributor and Yes campaigner Una Mullally said the vote proved “the fiction of Ireland as a conservative, dogmatically Catholic country has been shattered. The past is left back there, and a new legacy is being created.” You can read her reaction to the result here.

In a subscriber-only piece, Fintan O’Toole argues that the referendum result represents a No in several respects.

In his reaction piece, Political Editor Pat Leahy said the referendum showed that the change in public attitudes in Ireland since 1995 extended to the hot button issue of abortion, long an area that Ireland by its laws marked itself out as different.

Political Correspondent Harry McGee has compiled a guide to the winners and losers in the abortion referendum, which you can read here. He also outlines how the Yes and No sides won and lost the referendum in this report.

Meanwhile, we have heard a lot from the campaigners and the politicians but now The Irish Times wants to hear from you, the reader. Give us your reaction to the referendum result here and we may publish a selection of the comments.