Voters arrive at Dublin Castle where the official abortion referendum results will be announced later today. 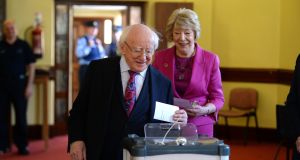 President Michael D Higgins and his wife Sabina casting their votes in the referendum on the Eighth Amendment at St Mary’s Hospital in the Phoenix Park. Photograph: Cyril Byrne

Yes, Yes, Yes. A resounding, emphatic Yes. And what a way to say it – the only way to say it: with conviction and clarity. This massive vote to repeal the Eighth Amendment to the Constitution leaves no doubt. The Irish people have taken ownership of their abortion issue. They have taken it out of the hands of unrepresentative lobby groups and celibate clerics and decided how they want to approach it.

On Friday, with steely assurance, a new generation of all the generations faced down the suffocating old certainties and swept them aside. On Friday, May 25th, 2018, they stood up and were not afraid to be counted. Because those days are gone now.

The official result has yet to be declared, but the exit polls point only in one direction, and it is going to be a monumental change and a major milestone in modern Irish history.

You could feel it in the air in the last week of the referendum campaign. Something had changed and something big was about to happen. It was there in the faces of the younger people – out there agitating, unashamed to be seeking basic rights for Irish women, because they were in the right.

It was there in the noncommittal comments of older men and women. People misinterpreted them as the words of No voters who didn’t fancy being ridiculed for bucking a liberal trend. Instead, they were merely keeping their counsel and waiting to have their say.

Thirty-five years is a long time to wait for a divisive and dangerous clause to be excised from the Constitution. But for those who waited decades to see those lines equating the life of a foetus from conception to its living, breathing mother, the 15 hours it would take for the nation to vote probably felt like a lifetime.

There couldn’t have been a better day for a vote. The sun shone on the island, welcoming back the thousands of men and women who traversed the globe and returned to vote. The sight of them arriving at ports and airports with their “Repeal” jumpers and wheelie cases moved the most hard-hearted observers to tears.

The gift of choice

These were the children of the women who had no choice, returning home from far-flung places and bringing back the gift of choice.

All day, up and down the country, the voters streamed into polling stations, exceeding turnout expectations from early morning. The huge number of young people, young women in particular, many with babies and toddlers, did the heart good. You could sense the mood of charge in their faces as they came into the polling stations, anxiously scanning the tables, eager to hand over their cards.

“I was torn, but I voted for my daughters,” said one woman.

“We were only exporting the problem,” said her husband.

The Taoiseach voted in his local school in Castleknock. Scoil Thomáis was swarming with photographers when Leo Varadkar arrived.

He said he was confident.

“The lads at my gym all told me they are voting Yes.”

Many more were in rural locations around the State. These were the men and women from the big international photo agencies, hoping to capture the image of Catholic Ireland voting away the vestiges of church authority from their private lives.

The presiding officer in Knock had to tell them to leave. With its shrine and place as the pilgrimage capital of Ireland, they descended on the Mayo village in the search of voting nuns, but they were unsuccessful. They had been told there was a big mural of the Blessed Virgin in Knock, but that has been painted over. They were most annoyed.

If the smiling women and the reticent men and the huge numbers voting in Dublin and other major urban areas was an indicator of rapidly gathering change, there were worries in more rural areas.

“The voting is very brisk, but everyone is very elderly. I think they’re being bussed in. I’d be worried,” said an acquaintance in Roscommon.

But everywhere the change was happening.

As the day wore on, and the figures climbed, the staying hand of pious history was always there in the background. There have been disappointments before. Powerful interests who exert huge influence in Irish political and social life were not going to lightly give up the fight.

In the headquarters of Together for Yes, they had run out of posters and people were offering to walk the city streets wearing sandwich boards. Minister for Health Simon Harris called in to see them for the first time.

Artwork along one wall of their offices – quieter than ever they have been in the last three months – had a quote from WB Yeats: “Education is not the filling of a pail, but the lighting of a fire.”

Slaves to a dark past

Education is the enemy of those who would work to keep Irish men and women slaves to a dark past.

The volunteers were optimistic, and a little teary. But, sure, who wasn’t.

They recounted trips to the airport to welcome those who were home to vote. One overseas camera crew was trying to find a No voter to balance their report. They couldn’t, until somebody noticed a plane from Medjugorje was due in.

They waited for the passengers to come through and finally came up with three people who would be voting No.

Yes, the signs were there. Driving into town, groups of volunteers gathered on roundabouts were being cheered and beeped by passing motorists. Joggers gave the thumbs-up. But on a flyover, a group of anti-abortion campaigners were getting nothing from the cars travelling below.

The Taoiseach wore his little Yes badge on his lapel. He said in the Dáil during the week that if there is a vote for repeal “Ireland will still be the same country it was before the vote. It will just be a little bit more compassionate.”

And some who have been around since 1983 will be a little bit more emotional.

Our morning started with a trip to the Phoenix Park to see Michael D Higgins vote. The then senator Michael D was fiercely opposed to the “callous” referendum on the Eighth Amendment in 1983, when he was president of the Labour Party. He said the TDs promoting it were “monumental in their hypocrisy”, and then quoted Michael Davitt: “If the Irish had a weakness worse than drink, it was moral cowardice.” Not any more.

After he voted, he got into his car and prepared to leave. Then he saw me and got out again, striding over to say hello. We shook hands and there was a little embrace and kiss from Sabina.

I told him it was all getting a little too much and I was so glad to see him. The President said he misses meeting a lot of people he used to see. I mentioned that 1983 speech and all the things he said and wrote back then. He was, of course, right. Michael D smiled and said softly “I’m above all that now.”

But I swear, I know it, there were tears in his eyes.