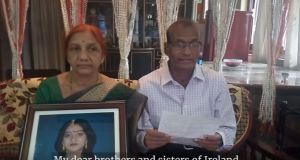 The parents of Savita Halappanavar say they are “really, really happy” the Irish people are on course to deliver a strong ‘Yes’ in the abortion referendum.

Her father Andanappa Yalagi, speaking from the family home in Belgaum, Karnataka in south west India, asked that the legislation to give effect to the referendum result be named ‘Savita’s law’.

“I want to thank you so much. I want to say ‘Thank you’ to our brothers and sisters in Ireland for voting Yes. It is very important. There has been really a lot, too much struggle for the Irish ladies.”

He said he and his wife, Akhmedevi were “very good” and were waiting with “a lot” of people at their home to hear the final result. They had however heard the exit polls from journalists also with them.

“We are really, really happy. We have one last request, that the new law, that it is called ‘Savita’s law’. It should be named for her.”

The couple had called a number of times for a Yes vote in the referendum, most recently last weekend in a video in which Mr Yalagi sat, with his wife holding a portrait of their late daughter.

In the video Mr Yalagi said no family should have to endure the pain and suffering they had has since Ms Halappanavar died. They still felt “worry and sorrow” six years on, he said.

“The life that Savita had, she had a very long life to lead but it was cut down mercilessly there. Savita loved the people of Ireland. Lots of people there say that Savita’s death hurt the entire Irish society.”

He says she had a long life ahead of her but that it was “cut down”.

Ms Halappanavar, a 31-year-old dentist , died at University Hospital Galway in 2012 after a septic miscarriage, during which she asked several times for an abortion. She was refused as a foetal heartbeat could be detected.

Her death first reported in The Irish Times in November 2012, galvanised a new generation of young women to campaign for the repeal of the 8th Amendment from the Constitution.

Article 40.3.3, which will be now be removed, guarantees to protect the “equal right to life” of the unborn and the mother, making abortion illegal in all but the most restrictive circumstances.

Last week Mr Yalagi said: “I strongly feel that the younger daughters of Ireland should not have the fate of Savita. I hope the people of Ireland will remember the fate of our daughter Savita on the day of the referendum and vote Yes, so that what happened to us won’t happen to any families.

“And by the doing this you will be paying a great debt to the departed soul. Thanking you very much.”