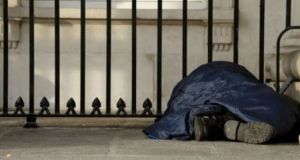 ‘We need to know why people who were ringing up for a bed were refused a bed.’

Emergency accommodation in Dublin for the homeless perpetuates an “inhumane inequality” by turning away people who don’t have links to the city, a homelessness organisation has said.

A report by RTÉ Investigates on Monday revealed some homeless people have been refused entry into emergency hostels because their last known address was not in Dublin.

A survey of 80 people who sleep rough or who use emergency hostels found 27 per cent were turned away from a hostel bed at different times since the pandemic began.

Anthony Flynn, chief executive of Inner City Helping Homeless and an independent councillor with Dublin City Council, said this situation is “not acceptable”.

Mr Flynn has written to the chief executive of Dublin City Council asking him to make a statement on the matter.

There were 56 homeless people who died in Dublin in the first 11 months of 2020. Mr Flynn said he is aware of three in the first two weeks of this year and believes this figure could be higher than his organisation has heard.

The homeless advocate said the issue of homelessness is particularly important during the Level 5 Covid-19 restrictions.

“We have a responsibility to provide for some of the most vulnerable individuals across the country with the provisions that they require. What we seem to be doing is failing on every level there as a council,” he added.

In a post on Twitter on Monday night, Minister for Housing Darragh O’Brien said no one should be sleeping rough when there is spare capacity in the system.

“Local connection should not be a barrier to anyone who needs emergency accommodation and I made that very clear to all local authorities in December and have reiterated it many times since then,” he said.

The Dublin Region Homeless Executive (DRHE), which runs the emergency accommodation on behalf of the council, did not respond to a request for comment.

Mike Allen, director of advocacy at Focus Ireland, said there needs to be a response which looks at the training and support given to frontline local authority staff.

“The rule has its roots in parish-based poor law relief and aims to ensure that one parish does not avoid its responsibilities by moving its needy citizens to another parish,” he said.

“It is important to recognise that many people do not have a unique ‘connection’ with one local authority area, the way we move around the country is much more complex than that.”

The charity has also launched a petition calling on the Government to end homelessness. It had almost 7,000 signatures on Tuesday afternoon.

Seanad leader Regina Doherty on Tuesday criticised a DRHE representative for one of the “coldest responses” she had ever heard, over the refusal to provide emergency hostel beds for those from outside the capital.

In one incident in the RTÉ Investigates programme a DRHE operator hung up on homeless man Joe Nolan who phoned about a bed and another told Dan from Kildare that they could not help him because he did not have a connection with Dublin.

The Fine Gael Senator said it was an “absolute disgrace” that Mr Nolan “was hung up on when looking for a bed . . . by one of our officials”.

She said comments “from the gentleman from the Dublin Regional Health Executive” demonstrated “what is the norm in this country when we think about issues – we think of them in terms of pounds, shillings and pence”.

A spokeswoman for the DRHE said accommodation had been sourced for Mr Nolan before the RTÉ programme aired and he was currently in that accommodation.

Ms Doherty said she would write to Mr O’Brien who she acknowledged was “quite clear” in the programme that nobody should be prevented from getting a bed.

She would ask the Minister “to make sure that the directions he has given are heeded”.