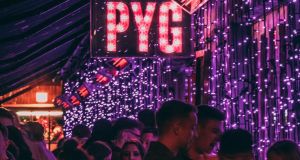 A Dublin nightclub is dispensing with entry costs for customers, and instead asking clubbers to donate to the Peter McVerry Trust homeless charity.

Pygmalion on South William Street is also doing away with ticket sales for its popular club nights and international guest DJ performances. The initiative will run for the duration of 2020.

Pygmalion’s booker, Colin Perkins, who is also a touring DJ, said the initiative was in response to the homelessness crisis which was omnipresent in the club’s neighbourhood, as well as the cost of living for young people in Dublin.

“We want to give back and look after the people who need it most by doing something positive. We’ll take the risk and hopefully it’ll be received in the right way.”

While the club has partnered with charities before, including asking surprise guest international DJs to donate half their booking fee to a charity of their choice for the club’s Secret Thursdays series, this latest initiative was an “experiment”, Perkins said. “It’s up to people what they donate – nothing, a tenner, whatever – but it will all go to Peter McVerry.”

The club’s impulse to “do things a little differently”, Perkins said, would see the venue, which also includes a bar and restaurant “absorb the costs” as well as diverting their income from tickets and entry charges to charity. “We’re in a position where the place is open 18 hours a day. There’s the club, a bar, a restaurant, so we can absorb the costs. If it was a club on its own, you wouldn’t be able to do it.”

Perkins added that visiting DJs often comment on the number of homeless people in Dublin. The crisis is “second nature when you’re in the city all the time”, Perkins said, “but take a step back and as a visitor, it’s more impactful”.

One-hundred per cent of donations on the door will go to the Peter McVerry Trust, which Perkins said was “delighted” and “taken aback” when he approached it with the idea. The charity is hoping to trial a contactless donation point in the club for customers.

Pygmalion is a popular nightclub with music fans, booking cutting-edge electronic acts. Of the club’s success, Perkins said: “We might as well do something good with it.”

Outdoors is the future of live performance, and it’s time to get it right
5

Inside Story by Martin Amis: An arrogant and long-winded mess
10