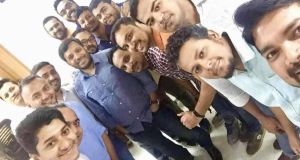 Former Irish Debenhams workers, who are campaigning to be paid redundancy payments following their own lay-off last month, have raised money to help 69 Bangladeshi employees left stranded by the company’s cutbacks.

The High Court appointed provisional liquidators for Debenhams’ Irish operation last month after it was told by the company that it is insolvent and could not pay its debts.

However, the Irish workers in Dublin and Cork learned later that workers in Dhaka had also lost out after a clothing contract was terminated, after they saw social media video posted by the Bangladeshis.

Responding, the Irish workers set up a GoFundMe page to raise €10,000 for the Bangladeshi workers, who will not get any State benefits and have no hope for now of getting another job.

Since Saturday, the Irish workers’ group – who include long since retired Debenhams employers – have raised €5,000 so far without publicity, saying that they could “not stand back and allow their peers in Bangladesh to suffer”.

“We are very saddened to hear our colleagues have been left with nothing considering there is no unemployment benefit in Bangladesh. They are proud people. They didn’t ask us for help. We offered to help them.

“As a group of workers recently made redundant by Debenhams, it angered us that this company could be responsible for ruining the livelihoods of so many people in such a cavalier manner,” they said.

Saying that they were heartened by the support shown to them by strangers thousands of miles away, a spokesman for the Bangladeshi workers offered thanks.

“I’m overwhelmed while I see your initiatives and how humanity is still alive. You don’t know us. None of us visited Ireland ever. But you feel our team members’ pain from thousands of miles away,” said a spokesman.

When contacted about the Irish fundraising efforts, a Debenhams spokeswoman said, “like all fashion retailers, we have had to make some very tough decisions in relation to our supply chain.

“We are trying to deal with all those affected as fairly and openly as possible. Suppliers who continue to work with us during our administration period will be paid to terms.”.

Last week, ITV News reported that it had seen correspondence from Debenhams’ administrator to Bangladeshi suppliers demanding a 90 per cent discount on garment orders already at UK ports.

A fundraising effort for the Bangladeshi workers set up in the UK by a former Debenhams product developer there, Sally Deighton, has so far raised £1,000.

Paying tribute, Ms Deighton said the Bangladeshis had worked “extremely hard” for Debenhams, and staff in Ireland and UK and could “not have done our jobs without them”.

“These people were more than colleagues. They dropped us at the airport for the 2am flight, collected us at 4am. They were always prepared, ensuring we always were able to do our jobs properly,” she said.

Last week, Debenhams announced that five more stores in Birmingham, Croydon in London, Glasgow, Leicester and Reading will not reopen after the Covid-19 lockdown is lifted because new rents could not be agreed with landlords.