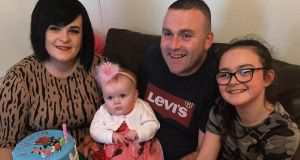 A fundraising campaign set up less than a month ago for a baby girl in Co Galway who suffers from a severe genetic condition that means she will never walk has already raised over €67,000.

Molli Ní Mháille de Búrca of Rosmuc, Co Galway is 17 months and 17 days old. Born a sturdy 7lb 6oz, her parents Amanda and Michael were delighted by her arrival, as was older sister Shayna (11), but soon they noticed all was not well.

The dieaese is incurable so it is now all about making Molli as comfortable as possible. She cannot move around and has limited arm movement but she is still strong enough to drink and feed herself.

She can’t roll around or lift her head but she does sleep well at night, but needs to be turned regularly. As she sometimes inhales foods she is on thickened fluids, and needs between three to five medical appointments a week.

A “Le Chéile do Molli - Let’s get Molli Moving” GoFundMe campaign was launched to boost Molli’s quality of life. One of the people behind it is Máire Caitriona Ní Dhonnacha. She said they had been overwhelmed with the response to date. “We didn’t expect it to do so well, so quickly.”

People had been contributing from all over Ireland and last Sunday local GAA clubs Cumann Micheál Breathnach and Cumann Sacair Chois Fharraige raised €12,000 towards the fund.

Overall it hopes to raise €150,000 to ensure Molli has a comfortable life. More immediately funds will go towards a special procedure which should help extend her life.

“She is an incredibly bright little girl who is full of life and devilment. All we want is that she can move around freely on her own and get the most out of life,” said Ms Ní Dhonnacha.