Half of working mothers consider giving up work over childcare costs 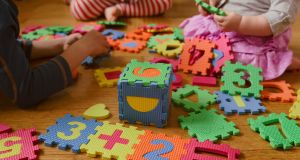 Childcare and the cost of it – financially, emotionally and logistically – is a massive issue for working mothers. Photograph: iStock

Half of working mothers have considered giving up work due to the cost of childcare; almost 90 per cent feel “overwhelmed at times” by the pressures of balancing work and their personal lives; while almost half feel they have been discriminated against at work because they are women.

These are among the stark findings of a national survey of working women published on Monday, in advance of International Women’s Day on March 8th. The findings underline the “pressures and worries” experienced by women in 2020 Ireland, says Network Ireland.

The women-in-business networking group has 1,200 members across the State. Almost 500 women responded to the online survey conducted between February 17th and 27th, according to network president Louisa Meehan.

“Childcare and the cost of it – financially, emotionally and logistically – is a massive issue for working mothers. Certainly some are working just to pay childcare because they don’t want to lose their careers and certainly some, once they have their second or third child, consider giving up working altogether because the cost is just too high.”

The survey finds half (49.3 per cent) have considered giving up work because of the cost; over three-quarters (77.5 per cent) deal with work-related emails and calls outside of working hours; and almost half (47 per cent) report feeling discriminated against in the workplace because they are women.

Some 60 per cent reported delaying addressing their own health needs because of cost.

Ms Meehan described as “distressing” that “so many women consider leaving work because of the cost of having their children cared for”, adding women should not have to choose between their employment and feeling confident they can access quality and affordable childcare.

“Having children is not a reason to hold women back from progressing their careers; it sends out the wrong message to women and to their families.”

She called for more affordable and easily accessible childcare, and for Government support for structures that enable more flexible working arrangements – especially for working parents.

Among measures could be the introduction of a working day beginning at 7am and ending at 7pm, to facilitate earlier or later starts and finishes than possible in the usual 9-5 working day.

She said “alarm bells” should ring at policy-making level that so many working women feel overwhelmed at times.

“Where are the supports for these women?” she asked. “Additional Government resources must now be put into helping women cope with the many demands on their talents and resilience.”