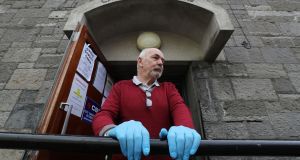 Alan Bailey, a volunteer and co-ordinator at the Capuchin Centre, is pictured outside the premises on Bow Street in Dublin. The centre has converted a room for use in isolating people if necessary. Photograph: Nick Bradshaw

Homeless services were ramping up precautions against coronavirus as the HSE issued “guidance for homeless and vulnerable groups” to operators of “hostels, hubs or residential settings”.

The five-page document includes advice on cleanliness, maintaining a supply of hand-santisers outside diningrooms, and says providers should “have a plan for dealing with persons who become ill with symptoms of Covid-19 including immediately isolating them from other people and seeking medical advice”.

The Peter McVerry Trust, which provides 800 emergency beds for adults in Dublin and Kildare, has been preparing for over a fortnight, its chief executive Pat Doyle said.

“We are operating on three principals – that we need to remain open and provide the services, that our client group is at high risk and many are immune compromised, and that anyone with mental health or addiction issues will be challenging to isolate if they are affected.”

The organisation has stockpiled more than 1,000 “packs” including disposable gloves, masks and hand sanitisers, told staff to stop unnecessary visits between their services and asked anyone planning travel to an affected region to consider cancelling. Mr Doyle and another senior staff member have pulled out of a housing conference in Seattle in the US later this month.

“Over 60 per cent of our beds are in single-rooms but some are two-beds in a room,” said Mr Doyle. “We have identified two units with 60 beds that the trust will use as isolation beds if the need arises.”

The charity is worried about the risk of cross-contamination due to the risk of methadone users attending clinics weekly and even daily potentially spreading infection in hostels.

“Making arrangements to have methadone dispensed in emergency accommodation centres would reduce this risk,” said Mr Doyle, who added that active drug users would be “be particularly challenging”.

“They will want to go out and ‘tap’ [beg]. We have asked the HSE to dispense high-dose methadone to them in accommodation, to try and ‘hold’ them.”

Cope Galway, which provides 60 emergency beds in the city, said it was “trying to source more hand sanitiser” to ensure it does not run out.

Cope’s assistant chief executive Martin O’Connor said the charity could accommodate anyone who needed to “self-isolate” but added that those in “active addiction would be a challenge”.

The Capuchin Food Centre in Dublin, which serves about 900 meals a day to some of the city’s poorest people, has converted a room for use in isolating people if necessary. It said that for the past fortnight an industrial-cleaning service has been “deep cleaning” the centre twice a week.

Hand gel is being provided to everyone arriving and the clinical director may direct that all service users be issued with packets of hand wipes daily, said the centre’s co-ordinator Alan Bailey.

A notice in the centre asks anyone who has been to an affected area or in contact with someone who has the virus, and who has symptoms, to immediately tell a member of staff.

“You will be given a mask and hand gel and taken to a separate room to be seen by clinical staff,” it advises.

Mr Bailey said: “We are conscious of how vulnerable some of our people are due to their lifestyles and poverty. There are all sorts of illnesses, respiratory, everything. If there’s anything going they’ll get it.

“We hope we can stay open but in a Doomsday scenario, if we have to close we’ll still give out takeaway food.

Gareth Kenny (37) was at the centre for breakfast on Friday. “I am very worried. I don’t normally get flus, but if I get that. If I can’t go out? Well, I get a bit of work here and there. I do a bit of building two days a week. I can’t afford to not go to work. It would be a major problem if I had to self-isolate, it would.”

The most recent data show there were 10,271 people in emergency accommodation in January, of whom 3,574 were children. There were 4,400 homeless adults without child dependents.