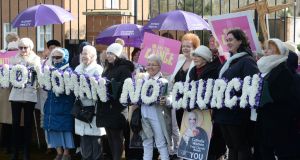 Members of We Are Church and the Catholic Women’s Council are pictured during a protest outside the Apostolic Nunciature on the Navan Road in Dublin on International Women’s Day. Photograph: Alan Betson/The Irish Times.

Journalist Ursula Halligan has criticised the Papal Nuncio to Ireland after he “blanked” her in his reply to a letter informing him of a demonstration to take place demanding equal status for women and men in the Catholic Church.

About 30 people attended the demonstration at the Apostolic Nunciature in Dublin on Sunday which coincided with International Women’s Day.

After the demonstration, Ms Halligan and co-coordinator Colm Holmes delivered a letter to the Papal Nuncio, Archbishop Jude Thaddeus Okolo, on behalf of We Are Church Ireland.

Speaking afterwards, Ms Halligan said she and Mr Holmes had written to Archbishop Okolo to inform him about the demonstration, but that his reply was addressed only to Mr Holmes.

“Myself and Colm wrote to the Papal Nuncio,” she said. “We let him know this was happening and we offered to meet him. I signed it as the joint co-ordinator with Colm and he only responded to Colm. He blanked me, it’s extraordinary.”

The letter to Archbishop Okolo, who is the papacy’s diplomatic representative in Ireland, was read by Ms Halligan to the crowd before it was delivered. The two letters were also published online showing the Papal Nuncio’s had replied only to Mr Holmes by name.

The Archbishop’s office was approached for comment but none was available on Sunday.

“We are sending a strong message to Pope Francis, ” she said. “Women have had enough, many of us are walking away. Those of us who stay, proclaim our equality and work for change. We believe in church structures that share decision making with all the people of God. We believe in a church where women are not invisible, silenced or ignored but share equally in all ministries.

“We believe in non-sexist language at Sunday Mass where God is referred to as Mother as well as Father. We believe in church structures that are transparent and accountable and that those guilty of sex abuse and covering it up are speedily brought to justice.

“In every other walk of life, women’s dignity and equality is being recognised; why should that stop at the church door?”

Ms Halligan said the church excludes half of its members from leadership positions because they are female, and that this makes it “an old boy’s club”.

“The people of God – if it is to be truly the people of God – has to include women, and not as subordinate helpmates to men but as their full and equal partners. We are here today to ask you for nothing. Our dignity and equality are God given. They are not yours to give.”

Ms Halligan added that a new umbrella group called the Catholic Women’s Council has been formed and is on a “pilgrimage of activism” that will culminate in a major event in Rome next year.

Also speaking after the event, Sr Cora Richardson (85) said she had direct experience of the patriarchal structure of the church.

“I tell women they should be equal everywhere, not just in the church. If the women all walked out of the church – and they are walking out – I think the church would collapse.”