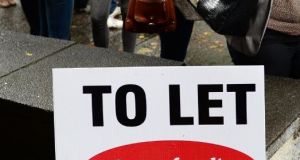 The high cost of rent for a single person is seen as one of the reasons for the rise in the number of homeless single adults. Photograph: The Irish Times

As families with children continue to exit homelessness - child numbers fell slightly from 2,651 in July to 2,620 last month - the number of adults without child dependents has been increasing steadily since April.

Figures from the Department of Housing published on Friday show there were 4,364 single adults in emergency accommodation in June; 4,413 in July, and 4,463 last month.

Dublin and the Limerick/Clare areas had the highest numbers of homeless single adults, with 2,962 and 436 respectively in August - up from 2,892 and 419 in July.

Its chief executive, Sam McGuinness said: “In four years, we have seen the number of single people in emergency accommodation increase by 100 per cent while the number of housing solutions for these people has failed time and again to measure up, or dried up completely. It is nearly impossible for a single adult to afford the rent charged in Dublin”.

He called for “dedicated targets and funding for one- and two-bedroom units,” in the four Dublin local authorities.

The Peter McVerry Trust welcomed the drop in overall numbers but described as “stubbornly high” the number of single adults.

“Strong consideration should be given to introducing specific annual targets for one-bedroom homes in each local authority,” said its chief executive Pat Doyle.

The Simon Communities said emergency measures put in place at the start of the pandemic - including a freeze on rent increases and a moratorium on evictions - had “led to a very significant reduction in the number of people accessing emergency accommodation.

“As fears for a second surge of the pandemic grows, it is vital that the preventative measures implemented earlier this year are reinstated”.

Focus Ireland, also calling for this step, said since these measures lapsed its services were “meeting tenants who are facing notices of terminations and evictions which is deeply worrying.”

‘I don’t want to be in Mountjoy Prison, nobody does’ 01:25
Mountjoy prisoners gain access to third-level education during pandemic 01:24
Science books to peruse this pandemic winter 01:00
The real Contagion virus is out there and it’s causing virologists to worry 01:00
More support needed for Midlands move away from peat, says commissioner 21:30