Catering staff say they were ‘dumped after years of loyalty’, call on former employer AIB for support 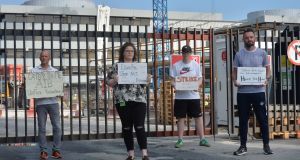 Catering staff at the former Allied Irish Bank (AIB) headquarters in Ballsbridge, Dublin say they were “dumped after years of loyalty” when given just a week’s notice earlier this month that their “jobs were gone”.

Kitchen and restaurant staff, who remained working at the restaurant after AIB moved most of its workforce to a new headquarters in the city-centre in 2019, have mounted an unofficial picket at the site.

While their union Siptu says 12 members are involved, their employer Aramark say only eight are involved in the redundancy claim. They say although their dispute is with Aramark, a multi-national firm to which AIB outsourced its catering service in 2018, they are looking to their former employer for support.

They say AIB had assured them their terms and conditions would “transfer with” them to their new employer. They accuse the bank of “reneging” on its commitments.

They are seeking at least the voluntary-redundancy terms agreed in 2012, of two weeks’ pay per year worked, plus three weeks. As these are compulsory redundancies, they are arguing for two weeks plus four.

Siptu shop steward Johnny Glynn (61) said staff were told last year the kitchens would close at the end of November 2020. Earlier this year they were told October 31st.

“Then on Friday 4th September they gave us all a letter saying the kitchen was closing on Friday 11th, our jobs were gone. A week’s notice.”

Talks at the Workplace Relations Commission last Wednesday broke down. The union has applied for an urgent hearing at the Labour Court.

Siptu organiser Brendan Carr said the dispute remained unofficial as the union had not been given enough notice by Aramark to ballot for industrial action.

“I hope we get a date quickly at the Labour Court. We’ll see what recommendation comes out of that. If the workers don’t accept it then we will have to talk about what official action we take.”

Mr Glynn, a chef de partie working at AIB for 12 years, said: “We find it terrible that AIB has reneged on its deals with us. Aramark are our employer, yes, but we were promised our terms and conditions came with us. We feel we have been dumped and in the end all the loyalty we have shown has counted for nothing.

“These two companies have multi-billion euro turnovers and we are here having to scrap over a few weeks’ pay.”

Acting head chef Chris Traynor (38) who worked in the AIB restaurant for 22 years, feels he has been “treated without dignity . . . I have spent all my working life here, and this is how I’m treated”.

An AIB spokesman said: “Any queries about catering staff employed by Aramark should be directed to Aramark”.

A spokeswoman for Aramark said: “We are disappointed with the actions of a small number of employees who are engaged in unofficial protest at AIB Bank Centre. Several means of formal dispute resolution have been pursued with Siptu, including the WRC. Aramark firmly believes that the redundancy package offered is more than fair in the Covid trading environment which has greatly affected our operations in Ireland. ” Aramark made pre-tax losses of €16.2 million for the 12 months ending September 27th, 2019..