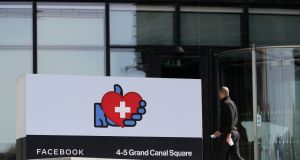 Facebook’s European headquarters in Dublin: employees who are able to work remotely can do so until the end of 2020. Photograph: PA

Facebook is set to reopen its Irish office in early July, in line with its global plans for the rest of its premises, provided current trends in the coronavirus pandemic continue.

But staff numbers will be limited in early weeks, with everybody who can work from home continuing to do so. Facebook employs almost 5,000 people in Ireland, mostly in two Dublin offices. It also has an office in Cork and a data centre in Co Meath.

The company said it didn’t expect to reopen most of its Irish offices before July 6th, and would follow Government guidelines and take health data into account when doing so.

Some critical employees who cannot work from home – content reviewers working on counter-terrorism or suicide and self-harm prevention or engineers working on complex hardware – could return sooner.

But when offices do reopen, they will be set up differently to help reduce the likelihood of spreading coronavirus.

Sources said occupancy would be limited to 25 per cent with people operating on multiple shifts. Temperature checks could be introduced.

Among the measures set to be introduced at the tech company’s global offices are a limit on how many employees can gather in meeting rooms, creating six-foot spaces between work areas where needed, replacing cafeteria meals with grab-and-go buffets and banning outside visitors.

The company is also closing its in-office gyms initially. The Dublin office does not have an on-site facility.

Staff will have to wear masks in the office when not social distancing and, in some locations, masks will have to be worn at all time while working.

Facebook said it didn’t plan to test employees for Covid-19, but it may do so in the future once quicker testing becomes more readily available, the sources said.

Facebook also is working to create a way to social distance on its shuttle buses in California, which are used by many San Francisco Bay Area employees to get to the offices. The company declined to comment on its plans.

Major technology companies, including Facebook, Alphabet’s Google and Microsoft were among the first to close offices and send their workers home as Covid-19 began to spread in early March, particularly along the US west coast where these companies have their headquarters.

Facebook announced earlier this month that employees who are able to work remotely can do so until the end of 2020. While major offices will open in early July, some, such as in Asia, plan to let workers in earlier.

Not all staff can work remotely. Employees working on hardware, operations or other tasks that aren’t possible at home will be asked to return to the office. Facebook may ask some hardware employees to return to the offices before July 6th as long as they are willing and abide by the new policies being put in place, one of the people said.

Facebook has already cancelled events until mid-2021. Chief executive Mark Zuckerberg has said he doesn’t want employees who can work remotely clogging up public infrastructure, such as buses or subways, for people who don’t have the option to work from home.

Twitter has told staff they can work remotely “forever”, while Amazon has disclosed an October return-to-work date. Apple has told employees it will start bringing more workers back to the office in phases beginning in late May or early June. – Additional reporting: Bloomberg

1 Four things that could help Ireland escape from the Covid-19 recession
2 Ross O’Carroll Kelly column 'not racist towards English people'
3 Brown Thomas and Arnotts shoppers will be able to book time slots for entry
4 EU needs to rebuild GDPR after only two years
5 Tax and the Pandemic Unemployment Payment: Your questions answered
Real news has value SUBSCRIBE