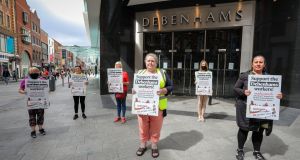 Former Debenhams workers protesting outside the store in Dublin earlier in the year. Photograph: Crispin Rodwell

A €3 million fund is to be established by the Government to assist former Debenhams workers who lost their jobs after the company went into liquidation last year.

Some 1,200 job losses resulted from the closure of the company’s stores in Ireland. The fund is likely to be administered by State agency Solas and it is believed it will be available for a period of about two years. The money will go toward training and upskilling, and will also support a business start-up initiative.

The move is part of a recommendation drawn up by Labour Court chairman Kevin Foley following ongoing talks with the workers, their union Mandate, the liquidators KPMG, and various Government agencies in a bid to resolve the long-running dispute over enhanced redundancy payments.

In a letter, Mr Foley concluded that the 2016 collective agreement for enhanced redundancy payments no longer had legal application, and that the current framework limits the scope for the liquidators to contribute to a resolution of the dispute.

He said the main preferential creditors of the Debenhams Ireland liquidation are the Department of Social Protection and Revenue Commissioners, with debt amounting to approximately €18 million.

The State has already paid out €13 million in statutory entitlements to former staff.