Agreement, if ratified, would see pay increase for public servants in each of next two years 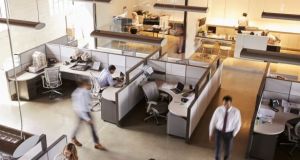 Measures introduced under the Haddington Road agreement in 2013 will be examined. Stock photograph: Getty

The proposed new pay agreement for State employees will cost more than €900 million over three years, the Department of Public Expenditure has said.

Under the proposed accord staff across the public service are to receive a 1 per cent pay increase next October or €500, whichever is greater.

A further 1 per cent rise, or €500, would follow in October 2022 under the proposals which were agreed between trade unions and Government representatives on Friday.

A further sum of €237 million - the equivalent of a further 1 per cent award - will be earnmarked for a new sector fund to deal with awards, commitments and claims within particualr parts of the public service. It could also be used for a general increase for personnel in specific sectors.

However, there is a sting in the tail for higher-earning personnel - those receiving more than €70,000 - who were scheduled to have the final elements of austerity-era cuts restored over the next year or so. The document suggests that they may not receive the proposed across-the-board increases.

“Where an individual is due an amount of pay restoration by July 2021 under section 19 and by July 2022 under section 20 of the Public Service Pay Pensions Act 2017, they will not benefit from the general round increase in that year,” the document says.

Minister for Public Expenditure Michael McGrath said the overall cost of the proposed deal was “affordable”. He said the proposals were “fair, taking account of both the dedication and experience of public sector workers while recognising the economic challenges which we face as a country”.

Issues such as the additional unpaid working hours for staff introduced originally under the Haddington Road agreement in 2013, which unions had wanted addressed, will be examined as part of a review due to commence in March. A €150 million fund is to be established to deal with issues arising from this review.

The proposed deal also includes a mechanism to deal with lower pay for teachers recruited in recent years. Those recruited since January 1st, 2011 would move from point 11 to point 13 of the pay scale, or move up one additional point.

Separately, overtime and premium payment levels will return to those that applied prior to the cuts introduced in 2013 during the recession.

“It was a firm objective of the Government to secure agreement to maintain the momentum of reform and change exemplified by the public service during this public health emergency and this has been embedded in the agreement,” Mr McGrath said.

Unions said the proposed agreement, which would run from January 1st next until the end of 2022 if ratified, was substantially weighted towards civil and public servants on lower-incomes.

Unions said they had achieved solid progress on the three priorities set by the public-service committee of the Irish Congress of Trade Unions (Ictu) at the outset of the talks - a mechanism to address issues outstanding from the Haddington Road agreement; a separate means to address sectoral issues; and a realistic and acceptable approach to pay.

A feature of the proposed agreement is the establishment of sectoral bargaining arrangements. A sectoral bargaining fund, initially worth 1 per cent of basic pensionable pay during the lifetime of the agreement, will aim to to deal with outstanding adjudications, recommendations, awards and claims in different parts of the public service. Alternatively the sectoral fund could be used for a pay increase to staff in particular areas.

However the document suggests that any group that engages in industrial action will be shut out of the proposed sectoral bargaining process.

The proposed new accord also seeks to “maintain momentum for reform” in the public service and acknowledges the recent “unprecedented display of commitment, flexibility, hard work and agility in public service provision” .

In the proposals the parties pledge “to harness this momentum to meet the immediate challenges of 2021 and 2022 including the continuing response to Covid-19, a return to normal delivery of health services, ensuring that schools remain open and addressing challenges that arose for children during the crisis, managing the response to Brexit, establishing the public service as the driver of best practice on remote working, and addressing digitisation”.

The document proposes measure to harness the potential for technology to improve service delivery.

It also proposes reforms to work practices including enabling temporary reassignments where necessary and increasing the movement of staff across the public service where necessary. It suggests that there could be longer opening hours for some services.

“There will be greater movement of staff across the public service where this is necessary to ensure the delivery of high-quality public services. Where currently applicable the guideline redeployment distance will continue to be 45km from the current work location or the home address, whichever is the shorter commute,” the proposed deal states.

“However, there will be no redeployment distance applied where an employee is working (and so long as they continue to work) mostly remotely. Parties will engage with a view to developing guidelines in relation to this issue.”

The proposed agreement retains existing arrangements and safeguards sought by unions against outsourcing of public services. There would also be new dispute resolution mechanisms including an industrial peace clause in line with those in previous accords.

The proposed agreement also contains a provision for a review of its terms “where the underlying assumptions of the agreement need to be revisited”.

Kevin Callinan, chair of the ICTU Public Service Committee, said the proposals were the best outcome that could be achieved over the relatively short lifetime of the proposed deal.