Drastic improvement in services needed within year, says Minister of State for Disabilities 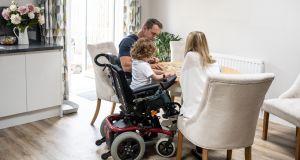 The Disability Act 2005 stipulates that a child is entitled to an assessment of their need within six months. File photograph: Getty

That children with disabilities are waiting years to have their needs assessed is “totally unacceptable”, according to the Minister of State for Disabilities.

A permanent solution must be implemented to drastically improve services within the year, added Anne Rabbitte. She said children and their families have been failed by the assessment of need process and that clearing the backlog is a “top priority”. Ms Rabbitte told the Committee on Children, Disability, Equality and Integration that waiting lists are “totally unacceptable and need to be improved dramatically”.

The committee meeting was convened to address some of the issues raised in a report published by Ombudsman for Children Niall Muldoon in October. That document highlighted that a number of children have been left on assessment of need waiting lists for years and called for greater resources to be allocated to the service. The Disability Act 2005 stipulates that a child is entitled to an assessment of their need within six months.

The Minister announced measures to “dramatically improve” access to services within the next 12 months. Funding has been secured for the recruitment of 100 additional therapists to the children’s disability services next year. She also confirmed that 1,798 of the 6,558 overdue needs assessments, as of June 30th, were completed between September and November. Clearing the backlog will release therapists to provide much-needed interventions for children, she said.

Social Democrats TD Jennifer Whitmore commended the Minister for her commitment, but said she has inherited a “broken system”. She expressed concern that the Minister was going down the wrong path and said many parents and clinicians believe the new standard operating procedure introduced in January 2020, which requires clinicians to identify whether a child has a disability within a 90-minute session, is failing children.

“What we are seeing is a system being established that is not going to meet the needs of parents or children and is going to cause difficulty for clinicians,” she said. Ms Whitmore asked the Minister to suspend rollout of the standard operating procedure until a consultation has been held with clinicians and parents of children with disabilities.

Green Party TD Patrick Costello accused the Minister of “playing with smoke and mirrors” by reducing the assessment of need backlog while following the new procedures which, he claimed, “are not . . . providing a quality assessment”.

Sinn Féin TD Mark Ward also raised concerns that the procedure is not as comprehensive as the previous system. He said many parents are “absolutely terrified” that something may be missed in the assessment of their child’s needs that could be detrimental to their development.

Ms Rabbitte said the standard operating procedure was introduced to streamline the entire process. She said it is not a “desktop exercise” and includes a face-to-face element. However, she admitted that it must be asked why so many clinicians are not in favour of the new procedure.