‘Social justice is only a dream if we don’t put health justice at the centre of it,’ says Ryan 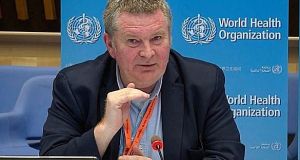 Mike Ryan: ‘We have got to get it together as a society.’ File photograph: Getty

Asked to reflect on the lessons of the pandemic, he replied that it had cast new light on global inequalities. He said it had uncovered some “very uncomfortable truths” about long term health status in communities.

“From that perspective it has both driven inequalities and has really highlighted and uncovered and pulled away the bandages from what is a very, very deep wound in our society and that is a lack of human rights based access to basic healthcare,” he said.

“We have got to get it together as a society. We just can’t keep doing this. Social justice is only a dream if we don’t put health justice at the centre of it.”

Dr Ryan joined the WHO in 1996 as part of a unit designed to respond to emerging and epidemic disease threats.

He has worked in conflict-affected countries and led many responses to high impact epidemics.

In his acceptance speech he said that throughout the year the WHO had partnered with Unicef, the Red Cross and other organisations to counter misinformation and infodemics, and to keep schools safe.

“For me the hundreds and thousands of volunteers, health professionals and community workers are true heroes. Irish Red Cross volunteers have provided a tireless support to the most exposed and most vulnerable members of our community,” he said.

“They delivered critical medical supplies, food and care packages to older and vulnerable people in communities when they were unable to leave their homes.”

Humanitarian of the Year

Between March and the end of June the Irish Red Cross carried out 485 patient transfers nationwide to surgeries and critical medical appointments. More than 200 volunteers helped prevent the spread of the virus in prisons.

Accepting the award, his widow Naoise Connolly said humanitarians on the front line risk their lives on a daily basis.

“Mick worked in countries torn by conflict and scarred by infectious disease. But Mick and 156 of his fellow passengers, including young children, lost their lives on what should have been a safe commercial flight,” she said.

She said this was because a plane that was known to be defective had been allowed to remain in service.

“Mick fought to protect lives. Safety was his priority and every life mattered,” she said.