Free travel scheme in doubt amid fears of overuse 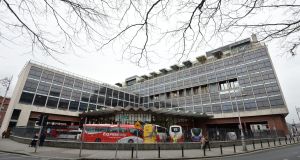 Busáras in Dublin: Free travel passes are accepted on most bus and rail services run by Dublin Bus, Iarnród Éireann and Bus Éireann as well as by Luas and over 80 other private transport operators. Photograph: Dara Mac Dónaill

The sustainability of current funding levels for the free travel scheme has been questioned after a 16 per cent increase in journeys taken by pass holders on public and private transport services was recorded last year.

Figures published by the National Transport Authority show 30.4 million trips were made under the scheme in 2018 – 4.2 million more journeys than the previous year.

Free travel passes are accepted on most bus and rail services run by Dublin Bus, Iarnród Éireann and Bus Éireann as well as by Luas and over 80 other private transport operators.

The scheme, which was introduced by former taoiseach Charles Haughey in 1967, is open to all people aged 66 and over living permanently in the State. Some people under 66 also qualify.

There are currently about 948,000 individuals who have been issued with free travel passes – up from 813,000 five years ago.

Almost half of more than 2.2 million passenger trips on Local Link bus services in rural areas last year were made by holders of free travel passes.

Fianna Fáil transport spokesman Marc MacSharry said the funding of the scheme warranted close monitoring to ensure an unfair burden was not being placed on transport companies or fare-paying passengers due to the increasing number of journeys made by card holders.

However, Mr MacSharry said he would be opposed to any proposal that eligibility for the free travel pass should be means-tested.

“I think most people would be happy that a proportion of taxation is going towards the security and wellbeing of the elderly in Irish society in the form of a free travel pass,” said Mr MacSharry.

The Sligo TD said Ireland’s ageing population, with large increases projected in the number of people aged over 66 over the next two decades, means the numbers using the scheme are set to expand into the future.

Mr MacSharry said a sustainable way of funding the scheme needed to be found.

“If hard-pressed commuters are being asked to make up the difference, that is certainly something the Government needs to look into,” he added.

A spokesperson for the CIÉ group said Dublin Bus and Iarnród Éireann had received no increase in funding for providing services under the free travel scheme since 2009.

“During this time the number of journeys by free travel card holders as well as our operating costs have increased,” the spokesperson said.

Extra funding was allocated to Bus Éireann last year to allow its Expressway services to be brought in line with other commercial operators participating in the scheme.

The CIÉ spokesperson said the group would like to see funding linked to the cost of running the scheme.

The Department of Employment Affairs and Social Protection, which oversees the issuing of free travel passes, said funding of the scheme had been increased by €5 million this year to €95 million after an extra €10 million had been provided in 2018.

Annual funding of the scheme had remained static at €77 million between 2010 and 2015 before it was increased by €3 million the following year.

In response to a parliamentary question earlier this year, the Minister for Employment Affairs and Social Protection, Regina Doherty, said more than €69 million was paid to the CIÉ group last year.

“This payment reflects a range of factors negotiated over the years including fare increases, peak-time access to free travel, service improvements, changes and enhancements. A discount of 40 per cent is applied to reflect the fares-foregone nature of the scheme,” Ms Doherty said.

Private transport operators have a 30 per cent discount applied to their funding through the scheme.

A department spokesperson said the administration of the scheme was reviewed “on an ongoing basis”.