Flowers, notes and messages placed at mural of Savita in Dublin

Mural has become a focal point of remembrance of Ms Halappanavar 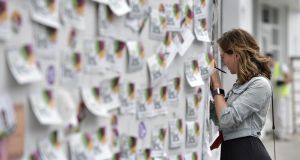 A woman writes a note on the Savita Halappanavar mural in Dublin. Photograph: Charles McQuillan/Getty

People have been gathering, laying flowers and writing notes of sorrow and gratitude, at a mural of Savita Halappanavar in Dublin on Saturday.

The mural, completed by the Aches graffiti artists beside the Bernard Shaw pub in Portobello this week, has become a focal point of remembrance of Ms Halappanavar, who died following a septic miscarriage in October 2012 in Galway University Hospital. She had requested a termination a number of times but was refused due to the presence of a foetal heartbeat.

Her death, described a “catalyst” in the long-running campaign to liberalise Ireland’s abortion laws, gave rise to several campaigns to repeal the 8th Amendment to the Constitution in recent years.

Article 40.3.3, inserted in 1983, recognises the “equal right to life” of the mother and the unborn has meant Ireland had one of the most restrictive abortion regimes in the world. Following Friday’s vote it will be repealed.

Among those laying flowers on Saturday was Laura Mahon (22), who had flown home from London to vote ‘Yes’. She said she was “one of the lucky ones, where Savita wasn’t lucky”.

Though she preferred not to tell what happened to her, she said: “I am lucky to be alive”.

On another bunch of flowers a note said: “Savita, because you slept many of us woke. Tomorrow we’ll awake to an Ireland less ashamed. Because you came to us our women can now stay with us when they need us. Thank you. Rest in peace.”

Hundreds of ‘post-it’ notes have been fixed to the hoarding beside the mural, with short messages.

One said: “Sorry we were too late but we’re here now. We didn’t forget about you.”

“Sorry, really sorry,” said another, while one woman wrote: “It is the biggest shame that your death galvanised repeal of our 8th Amendment that failed you. I’m so sorry Savita. Love Annie”.

Other messages included: “I voted for you Savita. May you rest in peace. You’ll never be forgotten along with all the other women who have suffered. All my love.”; “You should be here. We are so sorry”.

One young man laid a bunch of sunflowers at the make-shift shrine, reached out to touch the mural briefly before walking on, tears in his eyes.

Marcus Bradshaw (32), who returned home from the Czech Republic to vote Yes, wrote a note: “We came home in our droves for you.”

He said being in Ireland for the referendum was like “watching the Velvet Revolution...the ban on abortion was always about controlling women. This vote is, in some way, about freeing women.”

Liz Fitzpatrick, from Dublin, said she was “struggling” with her emotions, as she wiped away tears.

“I am so overwhelmed. I was saying to my daughter today, we must never, ever forget her name. I hope her family take some comfort today when they see how grateful the Irish people are, and how sad.”