More than 3,500 people, from 160 countries, become Irish at ceremony in Killarney 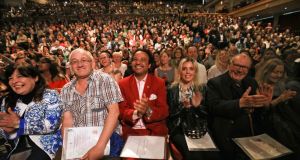 A language test for citizenship applicants is under consideration in order to improve immigrants’ integration into Irish society, a senior Department of Justice official said on Monday, as more than 3,500 people from more than 160 countries took Irish citizenship in Killarney.

Ireland does not currently require new citizens to be proficient in English or Irish, and it has not yet been decided if new requirements will stipulate either language. The test, which is at the early stages of discussion, would help to combat what Raymond Murray, an assistant principal at the department, said was some residents’ lack of English after five years in Ireland.

Monday’s three events in Co Kerry were the first time a big citizenship ceremony had been held outside Dublin since they were introduced by Alan Shatter, as minister for justice, in 2011. Candidates were given information packs that included the words of Amhrán na bhFiann and details of how to register to vote and obtain a passport.

The ceremony was led by the retired High Court judge Bryan McMahon; he told the new citizens, who swore an oath of fidelity to the nation and its laws, that Ireland understood emigration better than most and urged them to remember their old countries and their old stories. “This State does not require you to forget the country you come form or erase your personal histories. Do not forget your own country. Bring with you your songs, your music and your stories,” he said to a round of applause.

Minister for Justice Charlie Flanagan told candidates their new country was relatively young but a place of culture where traditions were cherished and history was ever present. “But it is also a place of openness and diversity,” he said, encouraging the new citizens to “participate actively” in their communities.

By the end of 2017 just over 113,000 people, from 181 nations, had been granted citizenship. Monday’s tally included 683 from Poland, 388 from Romania and 339 from the United Kingdom. The number of British people taking Irish citizenship has soared since the Brexit referendum, officials said.

One of the 388 Britons swearing allegiance to the Republic on Monday was 93-year-old Claude Cooke, who served in the merchant navy during the second World War, with the P&O shipping company, on troop ships in the Mediterranean.