Father of deaf daughters calls for deportation order to be reversed 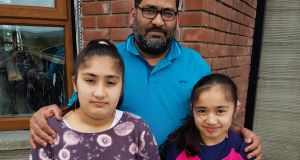 Mohammad Basharat, with Samia (12) and Fatima (9), says the treatment his daughters require will not be accessible in Pakistan

The father of two deaf daughters has called on the Department of Justice to reverse his family’s deportation order on humanitarian grounds, warning that his children will not receive the healthcare they require if they are returned to Pakistan.

Mohammad Basharat and his wife, Sadia, were informed in September 2018 that their family would be deported to Pakistan despite medical advice that their daughters require specialist care for their hearing impairment.

Both Samia (12) and Fatima (9) were diagnosed before coming to Ireland with sensorineural hearing loss and use cochlear implants to hear. Mr Basharat says the treatment his daughters require will not be accessible in Pakistan. He also warns that they will struggle to communicate as they do not speak Urdu.

The family arrived in Ireland four years ago after Mr Basharat’s brother, a UK citizen, moved to Oldcastle in Co Meath and bought a takeaway. Mr Basharat had been living in the UK where he was awaiting a decision on his appeal for a work permit after his initial application was rejected.

His wife and children followed him in 2011 after it became clear that his daughters needed specialist care and were fitted with cochlear implants in the UK. In 2015 the family moved to Ireland as dependents of Mr Basharat’s brother under their treaty rights as family members of an EU national and were given a temporary stamp to remain.

However, their application was eventually refused on the basis that the family did not meet the criteria as dependents of an EU citizen. In the interim, Samia gave birth to her fourth child, a son named Mohammad.

The family appealed the 2018 deportation order, arguing they should be given humanitarian leave to remain based on their daughters’ health requirements.

The family’s lawyer underlined in additional submissions to the Government that the cost of implant treatment in Pakistan was in the region of $50,000 (€44,300), far beyond the means of the family, and not available through the public system.

It was also noted that Samia, who was not fitted with implants until she was six, is entirely dependent on implants for hearing and that language learning had been extremely challenging for her. Transferring her to a non-English speaking environment would have a “detrimental effect on her education and her language development”, argued the submission.

A letter from the cochlear implant programme at Beaumont Hospital stated that Fatima would need to remain in a country with a recognised cochlear implant service as she will need regular reviews for the rest of her life.

The girls rely on assistive technology and special educational supports to keep up in school but still suffer from language development delays. They regularly attended audiology, speech and language appointments in Beaumont hospital.

Mr Basharat has started an online petition calling on the Minister for Justice to revoke the decision which has been signed by 7,042 people to date. “Deportation would have a detrimental impact on their health, security and language development.

“This will majorly disrupt the progress they have been achieving here in Ireland,” he said. “My son was born here, I’m working full time with my brother and I’ve bought a house here. I’m paying my taxes, I’m not a burden on the State. Our case is genuine, I’ve told them everything about myself, why should I have to leave?”

A spokesman for the Department of Justice said he could not comment on individual immigration cases but noted that deportation orders were only made “after the individual case has been thoroughly examined under all of the headings prescribed in both domestic and EU law”. Under this process a person’s right to a private and a family life, as laid out in Article 8 of the European Convention on Human rights, is considered as are any issues raised in written representations to the Minister, he said.