Belfast language group Pobal to close due to lack of funding 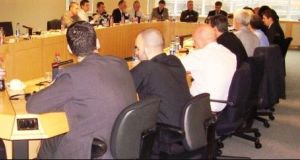 Pobal was set up in 1998 as a forum for groups working to promote social, economic, artistic and educational projects for the Irish speaking community in Northern Ireland.

The Belfast-based Irish language support and advocacy group, Pobal, has announced it is closing its office due to a lack of funding.

The organisation confirmed in a bilingual statement on Thursday afternoon that its Belfast office would close on April 30th, 2019 and would no longer be able to provide any additional services. Its two websites – pobal.org and pobalealain.org – will remain online until March 2020 for downloading information only.

Pobal was set up in 1998 as a forum for groups working to promote social, economic, artistic and educational projects for the Irish speaking community in Northern Ireland.

The group had struggled financially since a decision was made by Foras na Gaeilge in 2014 to cease funding for its work. The north-south language body’s decision to reallocate and reduce funding in 2014 was described at the time as a “new era” in the development of the Irish language.

Since then, Pobal had been operating with one part-time staff member instead of its previous six full-time workers.

“After twenty years of working for the Irish speaking community, this has been a difficult decision, taken exactly five years after Foras na Gaeilge’s decision, under direction from government ministers at Stormont and Leinster House, to end funding to all the organisations based in the six counties previously in receipt of core funding, in favour of six Dublin-centric organisations,” said a statement from Pobal chief executive Janet Muller.

Since 2014, the group has continued to undertake “a comprehensive and challenging work programme with a small capacity building grant from Belfast City Council and drawing on organisational reserves to cover all other costs”, she said.

Despite the drop in funding, the group had maintained a high profile, particularly in relation to the Irish language Act, a campaign which Pobal initiated in 2004, said Ms Muller.

She added that the network had also undertaken “ground-breaking research projects” used by the Council of Europe in the implementation of the European Charter for Regional or Minority Languages and the Framework Convention for the Protection of National Minorities.

“We should like to thank all those who have supported us over the last twenty years and we send best wishes for the future to all our members,” said Ms Muller.