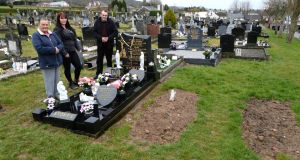 John, Bridget and Mary Stokes at St Mary Cemetery in Carrick on Suir: “The onus is on the council to get their records straight.” Photograph: Cyril Byrne / The Irish Times

The exhumed remains of a Tipperary man’s father have lain in an undertakers for six months amid a dispute with a local authority.

John Stokes (74) had the remains of his father, also John, exhumed from a grave in Kildare last September for reburial in what he was told was a “vacant plot” beside his late mother and sister in Tipperary. A reburial ceremony organised for September 14th, 2017 had to be cancelled, however, when human remains were found in the “vacant” plot.

Mr Stokes wants to rebury his father, who died in 1967, with the remains of his mother Mary (35) and sister Mary (1) who died tragically in 1948 and were buried in St Mary’s Cemetery in Carrick-on-Suir.

Mr Stokes was four when his mother, who was eight months pregnant, lost her footing on the banks of the River Suir, at Ballylynch, Carrick-on-Suir on Easter Monday, March 29th, 1948. “She slipped. I remember her pushing me back and saying, ‘Get back son. I’m drowning’. I began roaring and crying. Some men came running and they tried to get her out.”

Gardaí and the State Pathologist’s office were called when the human remains were found at the plot in St Mary’s Cemetery in Carrick-on-Suir. Forensic anthropologist Laureen Buckley examined the remains on September 15th.

She found the bones to be “consistent with the remains” of a woman that died in her 30s, in the 1940s, and therefore “being that of Mary Stokes”, his mother. An infant’s remains were also found. She also refers in her report to “the side of a coffin” visible from an adjacent grave – the original 1948 plot which bears the headstone of his late mother and sister.

The council proposed the reburial should go ahead after receiving Ms Buckley’s report.

The family, however, point to apparent contradictions between Ms Buckley’s report, church records and council records, about the location of the 1948 burial. While the family were told they had recently bought “plot 1” by the council beside “plot 2” (in which they thought were buried Mary and her daughter), Ms Buckley’s report refers to the deceased mother and daughter in “plot 1”.

It has since emerged, in an email to the Stokes family solicitor James Reilly dated March 22nd, from Martin Nolan district administrator of Carrick-on-Suir with Tipperary County Council, that “five burials have been found as having been recorded without a plot number at the time of Mrs Stokes burial in 1948”.

Mr Stokes daughter, also Mary, who has been corresponding with the council on her father’s behalf, says the situation has become “less and less clear”.

The council has offered a new plot “in an active part of the graveyard” in which the remains they say are those of Mary Stokes and her daughter, can be re-interred with John Stokes.

The family says they need to know for certain whether the bones found are of the late Mary Stokes and her child. They also don’t want to move the grave, which was bought 70 years ago by the late John Stokes (who was initially buried in Kildare) and the family having visited that part of the graveyard, since.

“What we need now is DNA tests done on the remains. We were told it was an empty grave when we bought it and it isn’t,” says Mary. “And we need to open our grave now and have it fully examined. We cannot proceed until all this doubt is cleared up.”

A council spokesman said it could not commission DNA testing as it had “no expertise in that area”. He also said the plot now belonged to the Stokes family and it would have to be them that commissioned DNA testing.

Ms Stokes responds: “The onus is on the council to get their records straight. How many other graves have the wrong people lying in them? This is causing our family huge distress.”

Asked how he feels, Mr Stokes, who is seriously ill, says: “I’m fairly troubled every way”.