That’s a wrap: Fill a Luas initiative a gift to the homeless 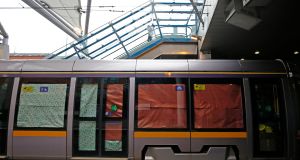 Teachers, students, accountants, IT workers, cleaners, bus drivers, parents and children in their hundreds arrived bearing shoeboxes filled with gifts for the homeless at a Dublin train station on Thursday.

The Fill a Luas event, organised by the charity Inner City Helping the Homeless (ICCH) and hosted by Luas operator Transdev, is in its fourth year. People were invited to wrap a shoebox and fill it with items suitable for homeless adults or children and bring them to the Luas platform at Connolly station.

Volunteers on board the tram received and checked through the boxes, while on the platform hot drinks and food were served, with clowns and Santa greeting the children.

Through the morning, cars were pulling up with their back seats piled high with boxes. The driver of one car had driven from Carlow to drop brightly wrapped boxes.

More than 25,000 boxes were donated last year, and Anthony Flynn, founder and voluntary chief executive of ICHH, hoped this number would be exceeded.

“We’ll be working through agencies [that work] with rough sleepers, homeless adults and families, to distribute them, and also with agencies working with asylum seekers.”

Declan O’Reilly from Rathfarnham was checking though boxes. “In this one, which is for a woman, there’s toothpaste, hankies, a small box of chocolates, underwear. You just check through for anything like blades or aerosols. I think they are afraid people might try to sniff or drink them. A lot of people have gone to lot of effort and expense. ”

Michelle O’Reilly, who works with the Association of Certified Chartered Accountants, explained her employers encourages staff to do a “give something back” day once a year, and she chose to help ICCH. All who brought boxes expressed their frustration and anger at the homelessness crisis.

Sarah Gill, a young woman from Portmarnock, brought two boxes – one for a girl and one for a boy. “I do it every year. I just put in some hats, scarves, gloves, colouring pencils, a few toys, sweets. The homelessness situation is a big deal at the moment. I think there should be more done.”

Aoife O’Sullivan, an English-language teacher at Dublin College of Advanced Studies, organised about 20 of her students to bring boxes.

“A lot of them are struggling with being away from home so it’s nice to do something together. I work in the city and I see homelessness on every corner, every day and it has had a massive and upsetting impact on me.”

Fiona McHugh from Dublin 6 was there with her mother, Marie, and daughter, Ella (2). “She has so many toys and a lovely home and everything we need, so we wanted to give back to people who don’t have all that ... Every day we see people on the streets. It doesn’t seem to be being resolved and it’s getting worse every year.”