Fórsa declines to vote on taking stance on Eighth Amendment 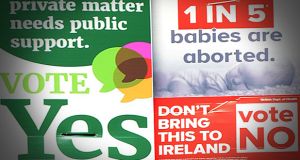 After the motions were put forward a number of speakers objected to them, with one delegate saying trade unions should not be involved in such “an emotive issue”.

Members of the country’s second largest trade union clashed on Friday over whether to advocate a position on the abortion referendum.

There was sharp division over the issue at the first annual conference of Fórsa in Killarney as delegates refused to allow a vote which would have backed three motions calling on the union, representing 80,000 members, to support a Yes stance in Friday’s poll.

After the motions were put forward a number of speakers objected to them, with one delegate saying trade unions should not be involved in such “an emotive issue”.

Others called for Fórsa to have “the backbone” of their convictions saying there was a week left to undo the damage of 35 years.

Some delegates responded angrily to Sligo branch member and No voter Francis McHugh when he asked who was going to fund the legalised abortions. Most abortions in the UK were funded by the taxpayer, he said.

James Kavanagh of the Schools Completion Programme branch said the first conference of Fórsa was meant to be “a unity conference” .

“I firmly believe they are fundamental issues, but they are not core business for Fórsa”, Mr Kavanagh said.

Delegates agreed and decided against voting on the motions.