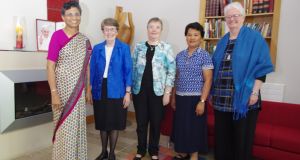 The Presentation Sisters have elected of Sr Julie Watson as their new congregational leader.

From Cork, Sr Julie spent 24 years in Pakistan where she was principal in teacher training and at a number of Presentation schools in which Christian and Muslim girls learned together.

She was elected at the congregational gathering of Presentation Sisters, which began at Nano Nagle Place in Cork on April 19th last and concluded at the Emmaus Centre, Swords, Co Dublin, on Monday.

The event coincided with celebrations to mark the 300th anniversary of the birth of Nagle, a pioneer of Catholic education in Ireland and founder of the Presentation Sisters. This was marked by a Twilight Lantern Walk through the streets of Cork, retracing Nagle’s footsteps.

Sr Fagan has previously held positions of leadership in the congregation, at national and international level. Sr Dias served in Zambia for 25 years and more recently in India.

Sr McDermott returned to Ireland in 2014 after 28 years in Zambia, working in social care, formation of younger sisters and leadership. Sr Robelo has served in area of education and leadership in her native Philippines.

New leader Sr Watson said she saw this “as an exciting time for us Presentation Sisters across the world. Along with our co-workers, the Friends of Nano, we dare to believe that through the empowerment of people we make our best contribution to the world.”