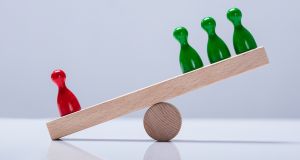 The findings are published by the trade union-linked economic think tank Tasc, in partnership with the Foundation for European Progressive Studies, on Tuesday.

The State We Are In: Inequality in Ireland Today says a “disproportionate” share of national income accrues to richer groups and that, consequently, poorer groups receive a lower share.

It further finds that although government tax and social welfare transfers are “essential in buffering the poorest segments of society”, many such transfers are subsidising low pay and “precarious” work practices that are hitting growing numbers of “invisible and undervalued” workers.

“In other words, government transfers, in addition to aiding struggling households, also enable poor work practices to continue,” it says.

Tasc says although Ireland has “a serious structural problem with pay inequality”, there is significant scope for redistribution between high and low-pay workers and between labour and capital, particularly in sectors such as retail.

The authors say most of the inequality in Irish society is generated within industries.

“Though Ireland has a comparative glut of high- and low-pay sectors, and consequently differences in income between sectors make a higher contribution to inequality here, that contribution is still modest,” they write.

“When compared to the more equal countries in Europe, it is not so much the poorest that fare as badly,” said the report’s author, Dr Robert Sweeney.

“Where Ireland is unusual is in the low share of national income that goes to the working to lower-middle classes. The top 10 per cent does nicely and the top 1 per cent in particular. This suggests that the problem for the struggling and too often invisible working groups is one of insufficient pay.”

“For instance, collective bargaining coverage is low. As well as predisposing Ireland to having higher market inequality, this leads overall to higher levels of low pay. When this is coupled with low rates and intensity of employment, another economic feature particular to Ireland, this raises further the risk of deprivation and poverty.”

The report author said inequality in Ireland was exacerbated further by the “relatively high cost of living and lack of universal provision in public services, in particular health, childcare and housing”.

“In many incidences, the working to lower-middle classes find that they are above the thresholds for access to these services, adding to their burden of inequality.”

The report also says that despite state transfers, the incidence of people “at risk of poverty” remains “stubbornly high” at 24 per cent, and is surpassed only by southern and certain eastern European states.

The new research is an abridged version of the Irish chapters in a larger report, Cherishing All Equally 2019, the fourth in a series of annual reports on economic inequality in Ireland and Europe.

Tasc, a charity with a public education mandate, receives core funding from Atlantic Philanthropies. It also receives funding from individual donors and from projects carried out jointly with the Foundation for European Progressive Studies, the trade unions Impact and Siptu, and financial services group JP Morgan.

The report published on Tuesday had financial support from the European Parliament.