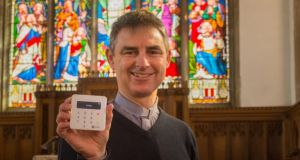 The Church of England introduced contactless payment terminals in its more than 16,000 churches, cathedrals and religious sites with the aim of making portable card readers available. Photograph: Chris Marsh

Digital collection boxes are the latest innovation at church services to facilitate worshippers who no longer carry cash but may wish to make donations.

The initiative is being trialled in the Church of England and reports last month indicated a 97 per cent increase in donations at church services piloting the digital collection box.

Dublin’s Catholic Archdiocese has not been slow to pick up on the digital trend. A spokeswoman said that “later this year we plan to roll out the ability for the majority of parishes to accept card-based payments using a parish payments system. This will cover many transactions such as offerings, pilgrimage payments and will enable parishioners to sign up for recurring contributions.”

It would not mean, however, an end to the traditional basket collections at Masses “which will remain in place for the foreseeable future”, she said.

In the Church of England worshippers can pick a sum from four options offered before using a card or smartphone to pay. The device offers 500 transactions without the need for recharging, though a fixed table-top version is also available which allows congregations to donate before, during or after a service.

The Rev Margaret Cave, vicar of Christ Church East Greenwich, London, where the scheme is being piloted, said the digital collection box has “gone down very well” with the congregation there, according to the BBC.

It follows reports that the Catholic Church in Dublin is experimenting with card machines in place at the back of churches to allow parishioners make a contactless contribution. It is done by a standalone machine. Five churches are involved on a pilot basis. These may now be replaced by digital collections boxes.

How many churches use new system?

Last year the Church of England introduced contactless payment terminals in its more than 16,000 churches, cathedrals and religious sites with the aim of making portable card readers available.

As with the Church of England, “financial contributions to the Church in Dublin have been in decline for several years for a variety of reasons, including a decline in the number of people attending weekly Mass”, said the spokeswoman.

“Several initiatives over the past decade have been introduced to improve diocesan finances such as the establishment of an office for Financial Development some years ago,” she said.

Meanwhile, some Irish parishes are highlighting the fact that under the 2001 Finance Act people can make donations to churches which don’t cost the donor an extra cent. Under the Act, parishes can claim from the Revenue Commissioners the tax a donor has paid on every €250, and more, given.

1 Cabinet extends advice to avoid non essential travel until July 20th
2 Judge dismisses €60,000 claim over boy (3) who cut his lip in fall
3 ‘We are worried’: Taoiseach warns plan to reopen all pubs on July 20th may be delayed
4 Leaving Cert student told he is not eligible for predicted grade
5 Minister for Children condemns ‘homophobic’ attacks from ‘far-right’
Real news has value SUBSCRIBE