Electric Picnic tents given to homeless migrants in Calais

English charity collect about 1,000 tents from festivals in effort to help refugees in France 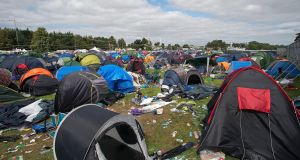 Hundreds of discarded tents from this year’s Electric Picnic have been delivered to homeless migrants in Calais.

The charity, which supports formerly homeless people, received a donation from three Irish festivalgoers who collected about 1,000 discarded tents from Boomtown Fair in Hampshire and Electric Picnic.

The Irish festivalgoers, who are part of a group dedicated to supporting refugee camps across the world, work with large event organisers every year to collect abandoned tents, sleeping bags and camping gear left at festivals to give to charity.

About 10kg of waste per visitor – equivalent to a full aircraft hand-luggage travel case – is expected to to be collected from the Electric Picnic site according to Friends of the Earth.

Last month, charity staff and volunteers, travelled to Calais to deliver more than 300 of the tents and sleeping bags to homeless migrants who were forced to flee their home countries.

Accessible shelter is essential for the migrants in Calais as there are no day or night shelters available, and the remaining 1,000 tents will be transported by Emmaus on Sunday, September 9th.

Emmaus Hertfordshire chief executive Tony Ferrier’s said since the camps in Calais were demolished in 2016, many of the migrants have been displaced.

“They are living in the woods, or anywhere that they can, while trying to avoid the authorities. Although they are not illegal, they are not welcome in Calais anymore,” he said.

“When we travel to distribute items, we are met with a long line of people who are very grateful and polite. There are a few exceptions as many are struggling with mental health issues, which is to be expected considering the horrendous journeys they have undertaken and stories that we hear of their friends being tortured or have died,” he added.