Electric Picnic review: Chvrches – There’s no roof, but they blow it off anyway 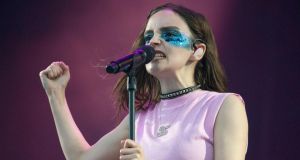 Chvrches: led by the slight yet mighty-lunged Lauren Mayberry, they bulldoze through Recover and uncork sinkholes of angst on The Mother We Share. Photograph: Dave Meehan

Main Stage
The wide open spaces of Electric Picnic’s main stage pose a challenge for Chvrches, whose head-hanging electropop feels designed for hugging the shadows. But the Glasgow three-piece own their big moment at a festival where they have previously woven their introspective magic in the smaller tented arenas. Led by the slight yet mighty-lunged Lauren Mayberry, they bulldoze through the cathartic Recover and uncork sinkholes of angst on The Mother We Share. There is room for humour, too. “Is that a flag with Jonah Hill’s head?” asks Mayberry, stumped as to why festivalgoers are flourishing a banner emblazoned with the likeness of the Hollywood actor. As with all the best bands, they also present a case study in contrasts. Before finding success as mopey pop stars, Iain Cook and Martin Doherty passed through endless Glasgow indie no-hopers. They still look as if they should be roadies for Primal Scream – which cannot be said of Mayberry, who is sporting glittering face paint and a twinkling dress. As darkness descends they finish with Never Say Die, a song both uplifting and ominous and thus an entirely appropriate farewell. There is no roof, but Chvrches blow it off anyway.