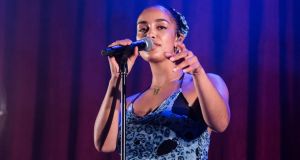 Other Voices, 7pm
If you’re looking for a new band name to write all over your metaphorical schoolbag, try Whenyoung. The Limerick trio, now based in London, make the kind of indie music that’s both a throwback to the glory days – think lots of jangly guitars, sharp new wave riffs, bouncy basslines and absolutely killer choruses – and thoroughly modern. Fronted by the magnetic Aoife Power, they’re a band who put thought into their visual aesthetic without compromising on the music, as proven by the brilliant glut of EPs they’ve already released to date (not to mention a wonderfully rousing version of The Cranberries’ Dreams that they occasionally drop into their setlist). One of the brightest Irish prospects to emerge in years, if their excellent new single Heaven on Earth doesn’t sell you on them, nothing will.

Main Stage, 10.30pm
Pharrell Williams is one of the architects of modern pop music, combining a magpie aesthetic with an innate inventiveness and managing to patch together the past of soul and disco with a freewheeling futurism full of skittering beats and beefy hip-hop licks. His passion project N.E.R.D may be most famous for their early noughties filthy dancefloor fillers like Lapdance and She Wants to Move but last year’s album No One Ever Really Dies was a less straightforward, more discordant, arresting piece of work. How this discomforting disorder will play live in a festival setting will be intriguing, but no doubt maverick Pharrell will have a few tricks up his sleeve. And with collaborator Kendrick Lamar also on the EP bill, there may even be a spot for him on the stage.

Cosby Stage, 11pm
With her debut album Lost & Found, released this June, touching on topics of racism, sexism, capitalism, greed, young love, toxic masculinity and gun crime in the UK, Jorja Smith is both beyond her years and very much of her time. Just 21, R&B singer has collaborated with Drake, Stormzy and Kali Uchis and earlier on this year she picked up the Brit Critics’ Choice Award, beating Mabel and Stefflon Don. Including elements of spoken word, her combination of social activism and R&B music isn’t a far cry from Dan Le Sac and Scroobius Pip – but with her smooth voice running through beautiful songs such as Goodbye, she proves herself a capable and dynamic songwriter. Thought-provoking and whip-smart, Smith is a star on the rise. Catch her now, before all her shows sell out.