Possible decriminalisation of drugs for personal use welcomed

Proposed move is health-based response to drug use, campaigners note 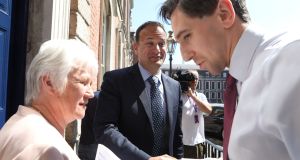 Minister of State for Drugs Catherine Byrne, Taoiseach Leo Varadkar and Minister for Health Simon Harris at the publication of the national drugs strategy. Photograph: Collins

Drug campaigner groups have welcomed the news the Government is considering decriminalising possession of small quantities of drugs.

Possession of drugs including heroin, cocaine and cannabis for personal use could be decriminalised under proposals announced on Monday.

Taoiseach Leo Varadkar, Minister for Health Simon Harris and Minister of State for Drugs Catherine Byrne published the national drugs strategy, which will govern the official approach to substance abuse until 2020.

A working group will be established to assess alternatives to criminal convictions for minor drug possession.

“I think it’s a very important conversation that needs to happen, we are totally in favour of the decriminalisation of possession of small quantities of drugs for personal use.”

Mr Duffin said he hoped the relevant legislation could be passed as soon as possible.

“Decriminalisation is not legalisation and I think that is important to note. It’s not about regulated control of drugs, its about a health-based response to drug use.”

He noted the success of countries such as Portugal which, in 2000, became one of the first countries to decriminalise drugs for personal use.

The Peter McVerry Trust also welcomed the publication of the new national drugs strategy. The charity said the strategy would bring about significant improvements in the availability of drug treatment supports and services.

“The new national drugs strategy is a significant improvement on what has gone before. It offers the potential to achieve a major shift in how we view and respond to the issues relating to drugs and the individuals and communities that are impacted by them,” the trust’s chief executive Pat Doyle said.

“The drugs crisis that is affecting every corner of this country and the measures included in the national drugs strategy include a greater focus on families and communities,” said Cllr Genockey.

“The inclusion of Labour’s injection centre proposals is very welcome, but we need to see the Minister start the process of issuing the licence to potential service providers,” she added.