A Dorset Street massage parlour has come under scrutiny in recent weeks as local residents have questioned the credibility of the business. The proprietor Peter Dandos gave us a tour of the premises. 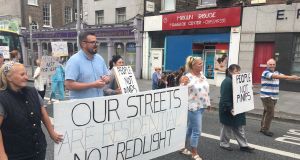 Protesters on Dorset Street, Dublin on Saturday voicing concerns over the proliferation of ‘massage parlours’ in the area. Photograph: Conor Pope 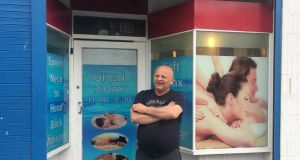 As U2 got ready to take the stage in Croke Park on Saturday evening, a group of north-inner city residents held a protest against the feared transformation of their locality into a place where the streets have no shame.

Just off Dorset Street, the group handed out placards expressing anger at the number of “massage parlours” which have opened in the area in recent years.

One woman, who asked to be identified only as Pauline and who lives just off Dorset Street, said the apartment next door to her home was a brothel.

“There is always a red light in the window and men are coming and going every 30 minutes,” she said, cradling an infant in her arms.

“You hear the door opening and closing all the time, and all the time it’s the men. Sometimes customers bang on my window. They were doing that when I was pregnant and it was terrifying.”

Pauline was relieved several months ago when her neighbours moved out and the apartment was vacant.

“Then, all of a sudden, there was more people there and it was a brothel again and again people are banging on my window and my door because they have the address wrong. I am at home with my baby and I tell this to the guards and I tell them that it is a brothel and they said there’s nothing they can really do unless they see cash being handed over.”

Also taking part in the march was a woman called Olive. “It’s not that we don’t want to give you our names,” she said. “But we are afraid. Some of these people are dangerous. It is just desperate. They are using the bins on the street for all the condoms. It’s just horrible.”

Norma Sullivan, another protester, said: “There is a really big problem with all the so-called massage parlours. First there was one and then another and then there was nine of these places in our neighbourhood.”

She said the protests organised by locals in recent months “were not just for ourselves or our neighbourhood but also for the women who are in there. Some of them seem very young and they are from overseas so you would have to be worried about their safety”.

Ms Sullivan and some of the other protestors had been watching a number of the establishments closely over the last year.

“They operate pub and club hours and from all our observations, it is always single men going in. I have never once seen a woman going in to one these places. And when we go in there is never any beauty products on sale and there is never a reception. There is nothing you would find in a normal massage parlour or in a spa.”

Also at the protest was the chairman of Fianna Fáil in Dublin Central Brian Mahon. “Just look at Dorset Street,” he said. “It is one of the main thoroughfares into the city and look at the state of it. The people who live here, they want investment they want their kids to be able to play outside. They don’t deserve to have all these brothels opening up on their doorsteps.

“We understand that the Gardaí are under resourced and what we are really looking with these protests is more exposure, to simply highlight the issue because then maybe something will be done.”

Garda sources in the area say they are aware of the problem and recognise that some of the massage parlours look dubious but they point out that collecting evidence in such circumstances is extremely difficult.

Coordinated raids involving gardaí, Revenue, immigration officials and Dublin City Council have been carried out on some establishments in recent weeks which have resulted in their closure.

The Moulin Rouge massage parlour is at the centre of the ongoing protests but its owner Peter Dandos insists everything he does is above board, and there has been no finding against the business.

He told The Irish Times that he had been the owner for less than a year.“The protestors, they come always; for more than three months now they have been coming,” he said.

“I didn’t start this business; it was here before and there were no protests then. Why did they not do this before? For years it was here.”

He insisted his business was “not a brothel, it is a normal massage place. I don’t want to have problems. I have just one girl here and we are just trying to make a living”.

Five years ago, the building, which is currently for sale, housed a jewellers. Then it became a massage parlour and traded under the name Caress of Heaven.

“I had to change the name from Caress of Heaven to Moulin Rouge, because it I could not work under the old name I know the new name might be a bit of a problem,” Mr Dandos said

“The police they come, they check the place out. I show them it is a regular massage place; I am telling you the truth.”

As he was speaking, a man approached. He was in his 50s and unshaven and unsteady on his feet. “Are there any girls working today,” the man said, seemingly oblivious to the presence of a reporter with a notebook.

“No, we only have one girl and she is busy now,” Mr Dandos said, after which the man shuffled off in the direction of the pub he’d come from.

“I know that looks very dodgy,” Mr Dandos said. “But what can I can say? I can’t control who comes here.”