Ireland’s Moulin Rouge: Inside a massage parlour on Dorset Street

A Dorset Street massage parlour has come under scrutiny in recent weeks as local residents have questioned the credibility of the business. The proprietor Peter Dandos gave us a tour of the premises. 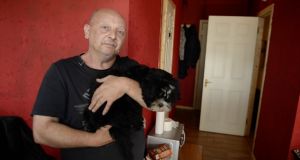 Moulin Rouge: Do people ever ask for sex? “Oh, for sure. Definitely,” says Peter Dandos, the owner of the Dublin massage parlour. Photograph: Enda O’Dowd

The original Moulin Rouge, built in 1889, typified the cultural exuberance of turn-of-the-century Paris. Exuberant shows, royal guests and posters by the artist Henri de Toulouse-Lautrec made for a cultural melting pot that celebrated an optimism and playfulness 100 years after the French Revolution.

The incarnation of the Moulin Rouge on Dorset Street in Dublin falls short in some, if not all, of these respects. But its proprietor, Peter Dandos, liked the name. “I have heard [Moulin Rouge] is a very nice place. They have girls there dancing. It’s a very beautiful place, but it’s not a whorehouse,” he says.

Accusations of operating a brothel have been levelled a lot at Dandos lately: protests have been held outside his massage parlour for more than six weeks. But the allegations don’t seem to cause him any concern.

A welcoming man of late middle age, whose conversation is punctuated by a hearty smoker’s laugh, Dandos is intent on getting his side of the story across: he is, he says, a plucky entrepreneur who recognised a gap in the massage market and seized his chance.

My daughter used to work in this business. She gave me the idea to do it . . . We started to work without electricity. We did massage by flashlight

“My daughter used to work in this business. She gave me the idea to do it,” he says. The path to relieving muscle strain turned out to be an uphill one. “We started to work without electricity. We did massage by flashlight,” Dandos says.

From that inauspicious start he started his empire. The reception area of his two-room massage parlour, now with electricity, is enveloped in deep-red wallpaper. Clients can wait on a three-piece suite draped in a black throw. Dandos’s cigarettes are the dominant smell. A TV plays YouTube videos by Szatmári Dáridó, a jaunty Romanian folk group who are available for weddings, balls and other events, according to their Facebook page.

The Moulin Rouge’s two massage rooms have basic massage tables and other paraphernalia. As I am not overly familiar with the requirements for a masseuse, it would be fairer to list the items I see than to comment on them: one pair of leopard-print high heels, one pair of pink wedges, four towels, one toilet roll, a bucket of water containing two floating pieces of white tissue, a toilet brush, two large black bin bags, a fan and a cabin-friendly suitcase.

With prices of €40 for a half-hour massage and €70 for an hour, business has been good for Dandos. “Some days it goes crazy. They go one after another.”

But, as with every enterprise, customers who misconstrue the brand’s goals can leave frustrated.

Do people ever ask for sex?

“Oh, for sure. Definitely,” Dandos replies, cuddling his terrier, Bourdry.

More than once a day people ask for sex?

“Oh, yeah, but before they would come three to four times a day.”

But brand identity takes second place to Dandos’s most immediate concern: a weekly protest by local residents about the masseuse’s working conditions and the possibility that the area will be inundated by “men-only massage shops”.

But you understand prostitution is illegal in Ireland.

“Massage??? Ha ha ha”, “People Not Pimps”, “No Red Light Here” and other messages are held aloft on home-made signs by about 10 protesters outside the Moulin Rouge. Locals tell Dandos they are concerned about health and safety, tax compliance and other issues.

“The police was here already. Everything was checked up,” Dandos replies.

The argument goes over and back for a few minutes while Dandos’s sole masseuse sits on a two-seater couch in the waiting area in a tight polyester nurse’s uniform.

Up to nine massage parlours have been operating recently, according to one local resident, Norma Sullivan. The weekly protesters take credit for some of them having closed. “It is the entry into the city from the airport, and we feel very let down, but we are also empowered.”