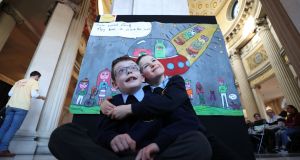 Ethan O’Brien and Luke McLoughlin at the results of an art competition for the International Day of People with Disabilities. Photograph Nick Bradshaw

Rising insurance costs are among a number of issues threatening the future survival of disability organisations providing vital services to tens of thousands of people across the country.

At its launch on Tuesday, the Disability Action Coalition (DAC) said it is to begin pre-election lobbying for €20 million in additional annual funding – it says the relatively small sum can plug operating deficits.

Between them they provide a broad range of services to about 65,000 adults and children with physical, intellectual, mental health and other conditions. The coalition was launched on the International Day of Persons with Disabilities.

“As the country has emerged from a severe financial, banking and economic crisis which hit us all in 2008, it seems to us, as the organisations providing vital services for people with disabilities, that we have been left behind,” said John O’Sullivan, chief executive of Enable Ireland who said the providers are now at crisis point.

“The situation for the sector has become so serious that the future of services for thousands of people with disabilities is now at serious risk.”

The non-profit organisations in question provide services on behalf of the Health Service Executive under section 39 of the Health Act, meaning while they receive funding they are not State services. Cuts during the recession have never been properly restored, they say.

“More recently we have been hit by the massive increases in insurance costs and we are not covered by the State Claims Agency. What this means for many of us is any [financial] reserves we had are now depleted and we are now running deficits,” Mr O’Sullivan said. This year alone, Enable Ireland’s insurance premium rose by €100,000.

The funding shortfall was recently raised in the Dáil by Independent TD Tommy Broughan. In response, Tánaiste Simon Coveney said the HSE was monitoring the financial position of such organisations and that a forum was in place in which to discuss any difficulties. “This issue is getting serious Government consideration,” he said.

Such assurances have done little to convince those on the front line. Barbara O’Connell, co-founder of Acquired Brain Injury Ireland said Tuesday’s launch may be their last chance.

“We have tried everything. Our reserves have gone down. We are here literally to highlight that this could just all collapse very quickly if we don’t get the funding that we need,” she said.

The DAC is appealing to politicians ahead of the next election for a commitment to instigate various recommendations on section 39 organisations set out in a previous independent review group.

Speaking at the launch, Mark Mitchell, who was diagnosed with primary progressive multiple sclerosis in 2002, said the MS Care Centre had become a “home from home” but was suffering from funding shortages. For €600,000 it could open for 360 days a year, he said.

Meanwhile, the National Platform of Self-Advocates, which says it is Ireland’s first disabled persons’ organisation and the only one run by people with intellectual disabilities, announced its closure due to an absence of funding.

It said that since 2011 it has advocated for the rights of disabled people and counts over 350 members.

“Since 2018, we have been trying to find State funding, but we have been excluded from public funding streams because of the way our organisation is run,” it said in a statement.

“Every solution that has been offered to us has asked us to hand over control of our organisation to non-disabled people, or to lose the independence we have taken years to build.”

Since her birth 16 years ago Rianna Dempsey has been reliant on the support of non-profit disability services, but her family have a problem with the system.

“From my own personal perspective I would rather my daughter’s future wasn’t dependent on charity,” said her mother, Lorraine. “I’d rather that the State fully provided funding for her future care.”

It is the crux of the matter for thousands receiving crucial supports that would otherwise have to be provided by the State. Those organisations now say there is a divide between the financial support they receive and public sector services.

“They have wrapped around our family for over 12 years supporting us to enable our daughter Rianna and her sisters to reach their goals.”

Since birth Rianna has needed the highest level of care. She has cerebral palsy, intellectual disabilities and uses a wheelchair.

It takes her family about 30 minutes in the morning to get her ready for breakfast. She then goes to Marino Special School in Bray, Co Wicklow and in the evenings has a specialist carer. All of this, and family supports, are provided by Enable Ireland, one of nine organisations in the newly-formed Disability Action Coalition.

“They have enabled us to be ambitious as parents looking ahead, but to make that a reality is becoming harder and harder,” Ms Dempsey says.

“All too often services are having to make cruel decisions that directly impact on people with disabilities and also their parents and families, to reduce, close down or not to open new facilities due to a lack of funding.”