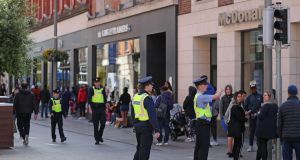 Gardaí have engaged with members of the public more than one million times since the Covid-19 policing operation began, with enforcement regulations used 302 times, according to data released on Tuesday.

Of those, 82 incidents have resulted in charges or summonses being issued, some of which related to multiple suspects. In 12 cases the DPP has directed no charges should be pursued and the remainder of cases were ongoing or under investigation.

Garda Headquarters, Phoenix Park, Dublin, added that over the past week 13 new incidents were recorded during which the powers were used against members of the public, around the lowest level since the Garda operation.

Since Tuesday, Garda members no longer have the power to take action against people who have travelled too far from their homes without a reasonable excuse.

Initially members of the public were allowed to travel 2km, to take exercise, and that increased to 5km before increasing on Monday to 20km and unlimited travel within a person’s home county.

However, the Garda power to take action against people who had exceeded those distances from home was set to expire on Tuesday. And while it had previously been extended, in May, it has not been extended further.

Gardaí still have the power to enforce other public health regulations relating to Covid-19, including prosecuting people who organise large events.

Garda Commissioner Drew Harris said there had been “very good compliance with the public health guidelines” since the start of the Garda operation, but he urged people to maintain that.

“As we enter phase two, it is important that we all continue to play our part in reducing the spreading of Covid-19 by staying local, not making unnecessary journeys, and maintaining social distancing,” he said.

“At the outset of the Covid-19 situation, I said that An Garda Síochána will continue to operate as a community-based policing service with a focus on protecting the vulnerable. This approach will not change during this phase.”

In its weekly update about the Covid-19 policing operation, Garda Headquarters on Tuesday said there were 13 new cases in which people were arrested or had details taken pending further action in the week to last Saturday.

Of those, six cases occurred during the week to last Saturday while seven predated that week but were officially recorded during it. The level of enforcement was in line with the previous week, when 13 new actions were also recorded.

To date in the policing operation there have been 93 incidents during which suspects had spat at or coughed at Garda members, up by five in the week to last Saturday.

Mr Harris described the spitting and coughing attacks, though isolated, as “a serious concern” for the Garda, adding spit hoods had now been used on suspects 70 times. The hoods are mesh head coverings which prevent a suspect spitting at gardaí and Mr Harris said they were being used only as “a last resort”.

Gardaí have also detected 2,018 other crimes, unrelated to Covid-19 public health regulations, while carrying out the Covid-19 policing operation. These included public order crimes, weapons and drugs offences and a range of motoring crimes, among others.

To date, the Garda National Vetting Bureau had vetted 30,403 applicants for Covid-19-related roles and the turnaround time for a vetting application was one day.