The strategy laid out by Government is the right strategy to deal with the Covid-19 pandemic, the chair of the Irish Epidemiology Modelling Advisory Group has told the special Oireachtas committee on the virus. 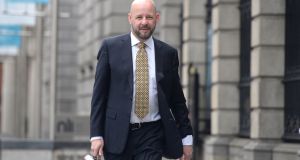 Prof Philip Nolan said ‘the management of the second wave will be different from the first wave’. Photograph: Dara Mac Donaill / The Irish Times

Another nine people with Covid-19 have died in the State, bringing the total number of fatalities linked to the disease to 1,691, according to figures released on Tuesday evening by the Department of Health.

Another nine cases have also been confirmed, meaning that a total of 25,515 people have been diagnosed with Covid-19 since the pandemic arrived here.

The Department of Health said the Health Service Executive was working to identify contacts of the patients most recently diagnosed with the disease. Currently, there are a total of 110 confirmed cases of Covid-19 in hospital, and of these, 35 individuals are in intensive care units around the country.

In a statement released alongside the figures, Dr Tony Holohan, the chief medical officer at the departmet, said that while “the situation continues to improve in both Ireland and across Europe, the World Health Organisation has noted that now is not the time to ‘take the foot off the pedal’, and that countries need to continue to work hard to avoid complacency and promote solidarity”.

“Contact tracing and public health surveillance are essential elements in our response to Covid-19. Public health doctors and their teams have quietly undertaken an extraordinary effort to contact trace over 25,000 Covid-19 cases to date.”

He urged people to “assist them in their work by limiting the number of people we meet and keeping a log of the people we interact with every day”.

While the number of Covid-19 cases and hospitalisations has fallen, the average number of close contacts reported by those infected with the disease jumped to more than five for the first time since early April, according to updated figures on contact tracing from the HSE.

According to the most recent data from the HSE, the average time from being referred for a swab to having a lab result for a test is currently 2.3 days. The median time is 1.9 days, according to data published by the HSE on Tuesday.

As of 8pm on Monday evening, there were 191 suspected cases of Covid-19 in the country’s hospitals, in addition to the 115 confirmed cases. Across the hospital system at 8am on Monday, there were 751 vacant general beds and, at 6.30pm, 119 vacant critical care beds.

There were 34 confirmed Covid-19 cases in intensive care, and a further five suspected cases of the disease receiving such a level of treatment. Some 19 Covid-19 patients were ventilated, meaning they were breathing with the assistance of a machine, alongside a single suspected case.

Earlier, the Covid-19 Oireachtas committee was told that no strategy “utterly insulates” Ireland from the coronavirus.

Chair of the Irish Epidemiology Modelling Advisory Group Prof Philip Nolan said the best way to suppress the virus was to adhere to the public health guidance including maintaining social distancing.

He rejected the view that “if only we had testing and tracing and a facemask we could do all the other things we used to do”.

Prof Nolan was being questioned about a letter signed by dozens of researchers, scientists and medics calling for a different policy of “crushing” the virus rather than trying to live with it.

Prof Nolan said that “different scientists have different judgments in the face of incomplete evidence”.

He said the strategy was not one of mitigation or living with an ongoing or significant levels of transmission but of suppression.

Prof Nolan said he fully supported the recommendations of the NPHET. “I support them and they accord with my judgment. No strategy utterly insulates us from the virus.”

He told Fianna Fáil health spokesman Stephen Donnelly that there will be renewed outbreaks of Covid-19 disease across Europe which would be in “small waves”.

Prof Nolan also told the committee that “the management of the second wave will be different from the first wave. There could be more targeted measures introduced to control future outbreak”.

Asked by Mr Donnelly if Irish society will be fully functioning by the end of the year, Prof Nolan said, “I don’t have a crystal ball on this and could not give a probability on the likelihood”.

“Our behaviour will continue to be modified by this virus for some time to come.”