Debenhams workers protest ahead of consultation closing on Monday

Garda took names and addresses of protesters, telling them they were breaching emergency restrictions 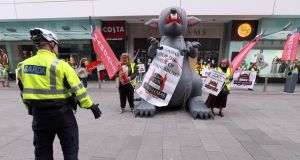 A giant, inflatable rat was the centre-piece of a protest by former Debenhams workers outside its flagship Irish store, on Dublin’s Henry Street, on Friday.

The workers, who were told by email last month the company’s 11 Irish stores were closing, are calling on the company to honour a previous agreement to pay two weeks’ redundancy pay per year worked, in addition to statutory redundancy.

Debenhams Retail Ireland Ltd announced on April 16th that it had applied to the court for the appointment of a provisional liquidator, and that its 957 employees would be laid off.

Consultations between the Mandate trade union and liquidators KPMG are due to close on Monday and indications are the workers will get just statutory redundancy, paid by the Department of Social Protection.

Friday’s protest, which was repeated outside Debenhams branches around the country, was the third since last month. It lasted about 45 minutes and was observed by a number of gardaí.

At the Dublin protest, about 30 workers stood socially distant from each other carrying placards with such slogans as “Debenhams Stop the Virus of Worker Abuse” and “The Devil Wears Debenhams”.

Towards the end a senior garda arrived and took names and addresses of the mainly women protesters telling them they were breaching emergency restrictions as the protest was not an essential event.

Shop steward, Jane Crowe, said workers were “livid” at how they had been treated.

“The giant rat is to show what rats Debenhams are for doing what they have done to us. We’ve had to up the ante.” She said it was not credible that the company had tried to save the Irish stores, or that it could not afford to honour its redundancy agreements. Debenhams’ UK stores are continuing to trade.

Ann Pilkington worked for 23 years in the restaurant. Like her colleagues she received a generic email telling her her job was gone. Asked bow she reacted, she said: “Angry was not the word.”

Gary Martin worked in stock movement for over 20 years. “It’s devastating because we were told before we got the generic email that we would be back to work after the lock-down restrictions were lifted.” He hoped the consultation period between Mandate and KPMG would be extended beyond Monday.

“So we can at least a decent redundancy because Debenhams don’t want to give us anything. They just want to walk away. They have just treated us deplorably.”

“I enjoyed my time here but now we are all gutted and heartbroken. We’re hoping the company will show us a little respect and pay us a decent redundancy for all the time we spent with them. “I have two boys, aged 15 and 11. They know this has happened but are just trying to keep things upbeat.”

Protesting Debenhams workers outside the Patrick Street shop in Cork, said they believed that the company had the resources to pay proper redundancy.

Valerie Condon, Mandate shop steward at the Debenhams shop on Patrick Street in Cork city centre, said the issue revolved around who owns the leases on the chain’s 11 stores and the stock currently in the closed shops.

Fellow Cork Debenhams worker, Madeleine Whelan said that they have received great support from members of the public with over 19,000 people signing a petition backing their call for proper redundancy terms.

Mandate had been in touch with joint liquidator, Andrew O’Leary of KMPG to explore the ownership of both the leases on the stores and the stock in them to see if they could be used to fund proper redundancy payments.

However Mr O’Leary told Mandate just two days ago that following consultations, lawyers, Matheson Solicitors had advised the Debenhams Retail Ireland is not in a position to renegotiate any of the leases on its own.

Mr O’Leary also advised Mandate that he expected to hold further talks with Debenhams Retail UK in the coming days on the legal position with regard to stock currently held in the 11 Irish stocks.

A spokeswoman for Debenhams said the company was aware of the protests.